February is work-out-every-day month, so I finally dusted off the bike after an embarrassing six month hibernation. I have no good excuse why it has been so long, other than it seems I've been training for marathons for the past 9 months, so running has been the priority. But it was a beautiful 60 degree day here in lovely San Diego, so I went for a couple of laps around Mission Bay.

The route took me by Sea World twice. The first time around, there were people from PETA protesting the fact that Shamu, et al are being held in captivity. There were probably 15 or 20 people holding signs near a traffic signal, sharing their slogans with people waiting for the light to turn green. It was pretty peaceable overall, but a couple of people were holding a large sign blocking my way onto the bike path. I rang my bell and waved, but they seemed to be ignoring me. When I was almost upon them (I was stopped at the light so I wasn't moving fast), one person moved a foot to the left so I could sneak by.

On my second time around, traffic was backed up for several blocks. And this was the reason: 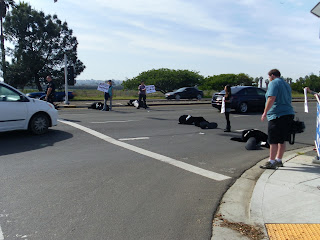 Now there were four people in Shamu costumes lying across the road, shutting down two of the three lanes. There was a policeman there directing traffic, probably waiting for others to arrive so he could clear away the protesters. I have never understood the thought process that would lead someone to believe that blocking traffic is the best way to get their point across.

On my first trip around, they had a captive audience every minute or so when the light turned red. People could read their signs and decide whether or not to tell little Sally that they weren't going to go to Sea World after all. Who knows how many people they reached by reminding them that the animals are in captivity for our education and entertainment, not for the animal's benefit. Probably not a ton of people, but they may have caused a few to look at things differently when they walked in the gate.

However, I can almost guarantee that by blocking traffic, they pissed people off enough that any message was lost. The only people on their side would be people they had already reached (and even then they might have lost several). Very few people are open to a new opinion or way of thinking when you start by pissing them off.

I can only assume that by jacking up traffic, it feels like they are making more of an impact. But I doubt it is the impact the really want to make.
Posted by Sean at Saturday, February 05, 2011