But Mom always lets me!

I am currently house and pet sitting for a friend here in San Diego. Not much to do with the house other than take in the mail, but there is a dog and a cat to take care of. But even they are pretty self-sufficient as they both have automatic feeders that continuously dump food in their dish as they empty it. That would never work with my pooch as she would just continue to eat until she got sick (and then start eating again).

I was warned that the cat does not like many people, so I shouldn't be too concerned if he snarled or hid away from me. He actually warmed up relatively quickly (as warm as cats get that is). The dog likes both me and my pooch, and we have seen each other a number of times, including the day before my friend left. But for some reason, she barked at me and hid away in her kennel when I came in. It was a half hour before she came out and decided that I was OK. Now we are fast friends and she curls up next to me when I am there.

The rules are a little different in this house, though, and that takes some getting used to. They get away with things that my pooch does not, but it is their house and not mine. 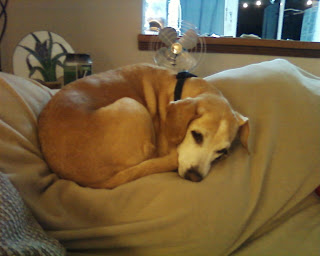 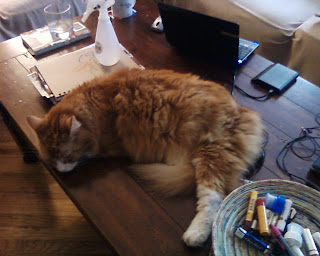 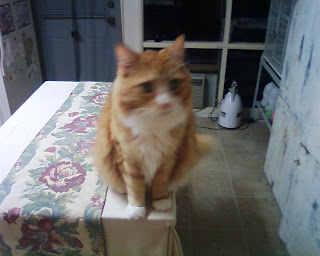 One of the few lines I drew when we adopted the pooch was the rule that there would be no dogs on the bed. But for the next couple of days there is now a dog and a cat in my bed. The dog is relatively small, but wants to be pressed up against me at all times. The cat comes and goes, but will occasionally bat me on the shoulder or put his nose on my forehead. I am not a huge fan of cats in general, and at 3am even less so. 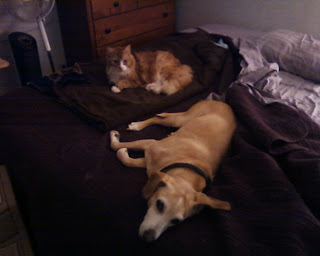 It is a funny line to walk when you are tempted to discipline someone else's pets or children. You are not the parent, and you don't always know what is forbidden in someone else's household. With children, matters of safety are a no-brainer. You stop them from doing anything that would harm them or anyone else. The line so far with the dog has been the barking. It isn't really my place to change the other habits.

That is hysterical. Are you sure you aren't sitting with Tuesday and Max? How does Sierra like it when she's on the floor and the other dog is cuddling up with you?