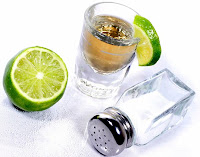 I remember when doing shots meant this 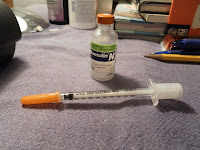 But such is the way of things. I'm getting a little too old for the tequila version anyway, and the needles belong to the pooch.
The insulin seems to be doing its job, but she is beginning to show her age. Her vision and hearing seem to be deteriorating. At first it wasn't clear if she was developing 'selective' hearing and just ignoring me when I called, but now it is pretty clear she is hard of hearing. She doesn't hear my alarm clock anymore, though she is generally up before it anyway.
She doesn't hear me sometimes and flinches when I go to pet her, and she has walked into the screen door a couple of times. It is a little sad when that happens, but I suppose fading eyesight and hearing are pretty normal things as we age. My eyesight isn't what it used to be either, and it is probably time for my first pair of glasses.

And there was one cute aspect to the hard of hearing issue recently. As I have mentioned before, the pooch likes to drag out shoes or a piece of clothing sometimes when I am away. I have only caught her in the act one time before, at the old house. I had just headed out but went back to get something I forgot. I had only been gone for 30 seconds or so, and when I opened the door, there she was with one of my flip flops in her mouth. Caught in the act, she dropped the flip flop, kept her head down and started wagging and wiggling.

Just the other day I went back inside shortly after leaving because I had forgotten my phone. When I walked inside, I could hear the pooch rummaging around in my bedroom. She hadn't heard me come in, even though the front door is just a short distance from my room. I just waited by the door, and soon enough she walked around the corner with a running shoe in her mouth. I wasn't moving, so I don't think she saw me immediately. She set down the shoe on the entry carpet before noticing I was there. And then there was happy wiggling.

But she went in for a check up recently, and most everything checked out, including her glucose levels related to her diabetes. 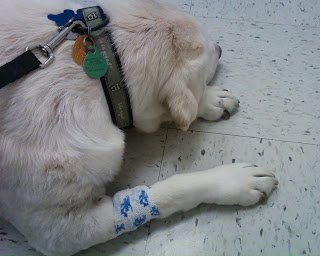 She still does her little dance when it is meal time, and is excited when I get home. She still prances when we head outside for a walk, even if it is just around the block these days. And even though she goes to sleep long before I do, she won't go to the bedroom to lie down until I go to bed.
It isn't fair that dogs don't live as long, and we won't grow old together, but I guess that ensures that I am around to take care of her in her old age.
Posted by Sean at Tuesday, November 09, 2010

You're killin' me Smalls. xo