Inspirations from the road

A couple of highlights from the marathon:

I noticed an Ironman tattoo on the calf of a guy who was running near or with our pace group. Below the tattoo were five tick marks. A gal and I started chatting him up and asking questions. Since he was running my pace and was about my size, it makes it easier to imagine doing the Ironman myself. As far as race day effort, I had heard that a half Ironman is comparable to running the full marathon. I asked him what he thought. He said that he couldn't tell me since he had never done a half Ironman. He just went straight to the Big Kahuna. Can't tell if that is inspiring or humbling.

I passed a guy in a racing wheelchair around mile five as we were headed uphill over an overpass. On the back of his yellow shirt, he had written in black marker, "Please do not give me a push". Of course nobody did, but most everyone gave him a "you the man" shout of encouragement. I also passed by a man pushing another adult in a full size wheelchair. By all appearances they were a younger version of Team Hoyt. If you don't know the story of Team Hoyt, here is a YouTube video, and also their own website. No question that I was both humbled and inspired by these folks.

As I was struggling through the last couple of miles, I caught up with the half marathon walkers. There was a man and a woman walking a few strides apart, and they had the same laminated sign pinned to their back. It read, "I have already lost 100 pounds, and I am participating in my first half marathon." I patted both of them on the back and told them "Great job".

Even though our pacer fell apart and finished some 35 minutes behind schedule, I found out the woman who was trying to qualify for Boston made it by a single second. And it turns out it was a very good idea for her to take the next day off. Registration for Boston opened on Monday the 18th, and filled up within eight hours. With this kind of demand, I sure hope they don't raise the standards on me.

I found a picture of the younger version of Team Hoyt 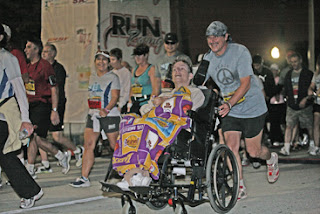