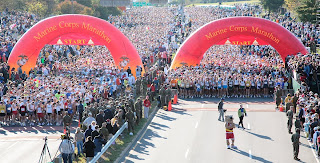 Thoroughly unprepared, we landed in Washington D.C. Friday night, and Saturday was spent on my feet. We spent a few hours at the expo (including an hour in line just to get in), and then did a little sightseeing afterwards. From everything I'd read, it seemed like a bad idea to do all this walking, but I was with three experienced marathoners and they didn't bat an eye. We had a great pasta dinner at the condo we rented, and the excited chatter, support crew planning, and wine drinking went late into the night.

Marathon morning started before sunrise as we walked the quiet streets to the subway. Every stop along the way, more bundled runners boarded the train. We arrived at the start line with at least an hour to stretch, take pictures, freak out, and stare blankly at some inner horizon. 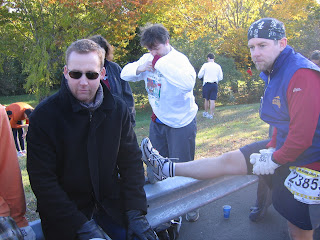 Unfortunately, there were only four of us running. Matt, who suggested this marathon, was sporting two stress fractures and could not run. Sean, Marci, Jonathan and I crossed the start line together along with 23,000 other runners. The sheer size of the crowd and moment were incredible.

The four of us ran together for the first mile or so, and then Sean and Jonathan sped off. Marci was doing the run/walk method, and I thought that this would be the best way to get me to the finish. In reality, Marci is the one who got me to the finish.

The knee pain started around mile 4, but it wasn't too bad initially. I had brought along a couple of Tylenol pills and took my first around mile 8. We were doing a 5 minute run/1 minute walk interval, so a break was never too far away. That helped mentally.

The route hit the National Mall around mile 10. We saw our support crew near the Lincoln Memorial and again at around mile 16. It is an incredible boost to see a friendly face when you are struggling. 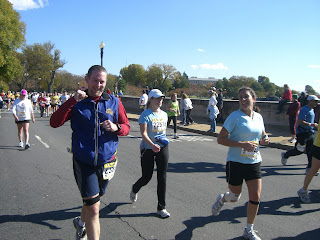 We continued along the Mall past the Washington Monument, the Capitol, and the Smithsonian, before heading south toward the Jefferson Memorial. It really is a wonderful route, but the next few miles were some of the toughest.

The route heads around Hain's Point, and after the crowds of supporters along the Mall, it was very quiet. It was also miles 17 through 20 of the marathon, so there are voices in your head that you would just as soon drown out.

Right around mile 17, Marci and I passed a runner who had collapsed and was receiving CPR. We later found out that he had died. Understandably, this freaked me right out. Over the next couple of miles, I could not get my heart rate to go down, no matter how slowly I ran.

I told Marci I needed to walk, and encouraged her to go on without me. She stuck with me, and after five minutes of walking, we started running again (with the understanding I was going to walk any remaining hills). We crossed the river again and ran an out and back through Crystal City. There was a great tunnel of music to run through, and there was even someone handing out dixie cups of beer. It was great to have the crowd support again, but I still couldn't pick up the pace.

But around mile 23 when the route finally turned toward the finish, I realized I was going to make it. No matter how long I had been running, or how badly I felt, three miles seemed somehow manageable. There was one final steep hill just before the finish and at the bottom was the 26 mile marker. I started to lose it. Tears were flowing and I had a tough time catching my breath. The hill was steep enough that I probably couldn't have run it anyway.

When we had walked to the top, we picked up the pace for a final push to the finish line. I grabbed Marci's hand and we crossed the finish line together. I don't know what that day would have been without her encouraging me to keep going.

The finish area was a madhouse, but we pushed through the crowds and eventually found our friends. Jonathan had such a tight schedule that he had already headed to the airport by the time I finished. We were eventually able to find a small patch of grass to relax on, and we started swapping the war stories of the day. And then it sunk in. I had completed a marathon. 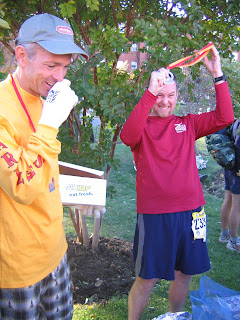 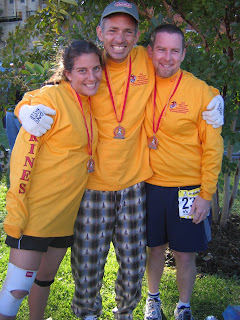 Couldn't have done it without you.
Posted by Sean at Friday, October 15, 2010

Great memories! Now you are kicking my butt in the sport of marathoning. Well done my friend!