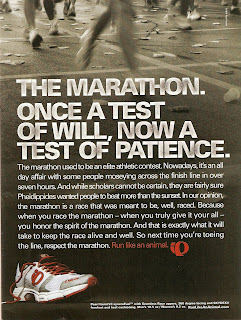 Click to enlarge and read
The above is the latest of the Pearl Izumi ads in the "We Are Not Joggers/Run Like an Animal" campaign. Since the market was already pretty full of established running shoe competitors, Pearl decided to pursue a nitch of "serious" runners. To separate themselves (and to get a little free press) they created some ads that pissed some folks off and stirred up a little controversy.

The text of their first ad said that though participation in running events is up, "Unfortunately, few if any of them are running. They're jogging, a half-hearted fore-aft movement of the legs that has about as much in common with running as bowling." More of the ads can be found here.

There have also been a couple of articles about how slower runners are ruining the marathon. Running With Slowpokes laments the increase of people "just trying to finish" and those running a marathon to cross it off their bucket list. Though he has finished six marathons himself, the author oddly says, "the human body is just not designed for such high-mileage running." Plodders Have a Place, but Is It in a Marathon? complains that the people finishing in six or seven hours are ruining the mystique of the marathon. That John Bingham and his penguin followers are gumming up the works.

It is an interesting (if unimportant) debate. Let me preface this with the fact that I am not a particularly fast runner. These days my marathon finish times are a bit above average, but nothing that would impress a "serious" runner. But I can understand some of the points of the article. Start lines are getting pretty crowded, and it can be kinda frustrating dodging around the walkers that decide to line up in the front. With the whole bucket list thing, some events sell out every year and have gone to a lottery to determine who gets in. And if those urban legends of runners that stop for lunch during a marathon are true, I would say they aren't taking the marathon seriously either.

But is the fact that more people are out training and running such a bad thing? I think it is great to see folks of all shapes, sizes and ages at the start line of every event. It is a mistake to try to size up someone's ability by looking at their appearance. I've been beaten repeatedly by people who at first glance look out of shape. And even to judge whether someone is a "real" runner by their pace is foolish. You have no idea what their story is on that particular day. They could be coming off an injury, running for a loved one or charity, or running with a friend as support.  I run with friends that finish a marathon in under three and a half hours, and some that finish in over six hours. And seeing them at the finish line, I can vouch that they are giving it all they have that day.

Fortunately, I don't see any of this self-righteous behavior at running events themselves. The start line is one of the most supportive atmospheres I have been a part of.  Running events are this weird combination of people competing as individuals, yet supporting each other as if they were on a team. I'm sure there are a few pissed off "serious" runners there, but maybe they are off on their own doing wind sprints to warm up. I'd rather hang out with the pack.

I'd have to say that anyone who's sense of accomplishment is affected by who else is on the course, isn't much of a purist anyway. And to those that complain that running a marathon no longer sets them apart (sufficiently), there is always Boston. I hope to get there someday.

Were I to toe the line at the San Diego Marathon in June, I would not be running my best time. But I would be giving it all I had that day, and I think I would be respecting the marathon like the above ad asks us to do.

Whether you run like an animal or not, run for yourself. It shouldn't matter who else is on the road, or what they think. Just get out there and run.

Man, what a dumb ad.

Very nicely stated, and yes, the ad ticked me off just a bit. :-) I guess I'm not good enough to wear Pearl Izumi's....so Aasics will just keep getting my $100/pr.