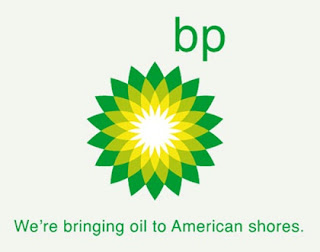 T-shirt courtesy of Despair.com
We won't know the extent of the damage the spill will cause at this point, but it is anticipated to eclipse the damage done by the Exxon Valdez spill in 1989.
As a part of the fallout from the '89 spill, Exxon pulled nearly all of their gas stations out of western Washington. I hadn't bought gas from Exxon in 20 years until I stopped at a station here in California. It will be interesting to see what the fallout is for BP. It appears they are still trying to figure out what went wrong and who all is to blame. Fingers are pointing to the rig operators, rig owners, government regulators and manufacturers of the failed safety equipment. The Exxon spill was more clearly blamed on the inattention of a drunken captain.
Exxon also avoided and delayed any financial responsibility to the commercial fishermen for the damage the spill caused. Through multiple appeals and twenty years of court cases, Exxon reduced their payout to a fraction of the original award ($383 million vs $5.3 billion). And of course some of the claimants had died off by that time.
BP has promised to pay for all the damages at this point. Will they spend their money on those hurt by the spill, or on litigation? We will see what they do after they are out of the headlines.
Posted by Sean at Saturday, May 15, 2010