You can't run from your problems.
But you'll both feel a little lighter when you get back.

~ from a New Balance shoe advertisement

I am at the end of my third week of running down in San Diego. Getting back to running regularly has been tougher than I thought it would be. After running with UPS in November and December, I ran regularly for three weeks in January, and it was going relatively well. Then I had two weeks around the trip down that I didn't run. In those two weeks off, it feels like I lost whatever fitness I had. Each time I went out in the past couple of weeks, I felt fat and slow. Hard to believe I ran a marathon in December.

Things are slowly improving as the miles add up. The great weather and beautiful scenery definitely helps keep me going even when I'm not feeling it. This morning I went for a nine mile run around Mission Bay. There is a nice paved path that runs around the east side of the bay, and since I needed some extra miles I ran around Fiesta Island as well. It is a pretty barren area with almost no development, but there is five miles of shoreline for people and dogs alike to enjoy. It was overcast and windy, but I was done before any of the rain arrived.

As I have mentioned before, although I enjoy running on a regular basis, it helps tremendously to have a goal event on the calander. If there isn't a looming deadline to prepare for, it is too easy to let things slide. And to that end, I have decided to run the San Diego Rock n Roll Marathon in June. I ran this marathon in 2007 with a bunch of friends, and since I'm down here anyway... Actually I would probably choose a different marathon for variety sake, but it is the latest one held before everything shuts down for the hotter summer season.

The course is a little different this year. The Marine training base where the marathon normally finishes is undergoing some renovations, so this year the race will finish near Sea World. The only changes to the course come in the last 8 miles or so. Instead of going around Mission Bay, the course doubles-back on the east side.
Old Course 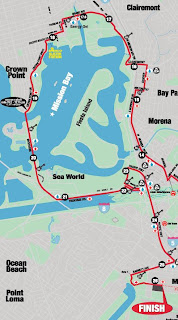 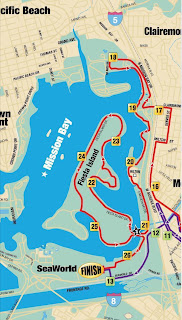 To make up some mileage the route goes around Fiesta Island, so I kind of previewed the the last part of the course today. I wish they could have eliminated the portion along highway 163, but of course they didn't ask me. They've also added a half marathon to race day for the first time this year, so we may be able to convince some other people to join us for the craziness.

So the training calendar is set. I just have to get out and make it all happen. I would love to beat my current personal best of 3:57, but we will see how training goes. If I don't make it happen in June, hopefully all the training will give me a great head start for a stellar fall marathon. The long term goal is to qualify for Boston by the time I turn 45. To do that, I need to cut 27 minutes off my best time, more than a minute a mile. A pretty tall order for my level of fitness, so for now we'll just focus on improving bit by bit, mile by mile.

Go Sean!! What about the Seattle RnR?