Don't leave home without it

I was out for a five mile run this afternoon, catching up on my exercise schedule and podcasts. There are a couple of podcasts that I listen to only while I am running. One of these is Two Gomers Run a Marathon.

Anthony and Steven are preparing for their first marathon. They had a podcast last year about their move from being sedentary to becoming half marathoners. Now they are taking on the full marathon, and their podcast is pretty entertaining. They are self-admitted Gomers who know little about running, and aren't afraid to let people listen in as they stumble their way through things.

Their journey to the marathon has already hit some roadblocks. In late 2009, Anthony was having doubts about his ability to keep up with the training, and was considering postponing the race for a couple of months. A week or two later, Steven was knocked flat with a case of the shingles. Shingles! They set a new marathon target for a race in March. After announcing which race they had decided on, a listener pointed out that it wasn't being held this year.

So then they decided on a marathon in Atlanta, also in March. They were back on track, gomering their way through training. Then Steven was hit by a car.

Thankfully he is mostly OK, though he has a few fractured ribs. As he said, "If your going to be hit by a car, make it a Smart Car." Not only is it small, but because it has a sloped front and no hood, the impact was spread over his whole body rather than breaking his legs. 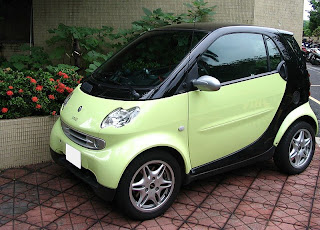 It was obviously still pretty painful. Here are a couple of shots of the car that hit him, and Steven in the hospital. 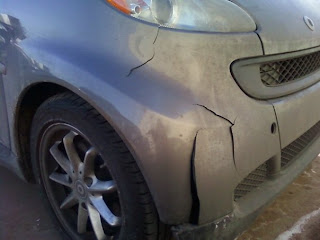 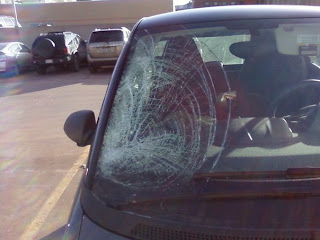 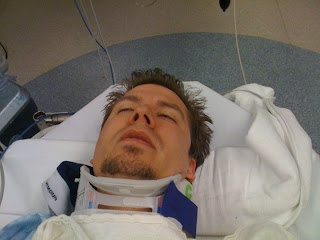 So their plans are on hold once again. One of the first things listeners mentioned/suggested was that the Gomers should be carrying a Road ID. Steven was out of town for a conference, running in an unfamiliar town without his family when he was hit by a car. The Road ID tells first responders who you are, medical information, and who to call.

I have been carrying one with me for a couple of years, and today's episode reminded me how important it is. It also reminded me that I hadn't updated the information on it since I moved to San Diego. I had to get a new one recently since my first one had the wrong contact information on it. It was J's old cell phone number that is no longer in use. The new one is the "interactive model". It has my name, blood type and a person to contact stamped on it, but there is also a phone number or web address where first responders can get additional contact, personal, and medical history information.

I am all updated, and checking every cross street more diligently as I run. I don't ever want to put my Road ID to use, but it is a little peace of mind for me and my family.
Posted by Sean at Tuesday, March 09, 2010

Thanks for the reminder.