As I have wandered around southern California trying to get acquainted with my new town, on several occasions I have driven in circles to find where I was going. Trying to hit several stores while out running errands became a bit of a chore, usually requiring printed directions or frequent check-ins with Google Maps on my phone. More than once I have missed a turn or exit and found it difficult to circle back. It also looked like I would be doing some regular work at multiple locations, so I broke down and bought a GPS receiver for my car.

I had emptied my change jar at a Coinstar machine and had a $40 credit on Amazon, so that is where I started shopping. I also checked out the local Fry's Electronics to see some of the GPS units in person, but their prices weren't any better. I finally decided on a Garmin Nuvi 285WT

which was on sale. I figured the routing ability of most modern GPS units were all roughly the same, so I was looking for a relatively basic model and maybe a few bells and whistles. The 285WT model had some good reviews regarding the intuitive ease of use, and the larger screen seemed to allow for more information to be displayed clearly. It also came with a free 9 month subscription for traffic information and Bluetooth for hands free cell phone calls.

I have used it for a week or two, and I have to say it is pretty handy. Beyond simple directions, it has helped me locate stores, gas stations and restaurants on the fly saving me some time and effort. There have been a couple of misses though, like telling me to turn right on Park St. when you're not allowed to, and leading me to a non-existent fast food joint when I was starving. The traffic info also takes too long to load to be of use during the morning commute, so it is a good thing it came with a free subscription to try it out. But in general the Garmin has been great.

And one of the handiest features is probably one of the simplest - estimated time of arrival. I do hate to be late.

Of course there are some disadvantages to knowing where you are at all times. Sometimes a wrong turn here and there leads to a surprising discovery. My friend Matt was also mentioning that since he has used a GPS for directions, he has stopped paying attention to how he was getting there. It dawned on him as he was leaving an appointment, that he had no clear idea of how to get home.

Probably shouldn't get too dependent on technology.


michael drives into a lake. from peter allen on Vimeo.

Oh, and another thing
Sean and I were standing in line at Home Depot the other day and there were some Thomas Guides by the checkout stand. I wonder how many they sell these days. 15 years ago they were standard issue in any construction vehicle. The books of maps were divided up in grids, and the table of contents in the back listed every street in the county with the corresponding map grid listed. It was a pretty good system to find places, but of course you still had to find out how to get there. And of course parts of it were out of date as soon as they were printed.

Just checked my truck, and there was a year 2000 Thomas Guide for the Puget Sound region stuffed under the back seat. Might be time to put it out to pasture next to the slide-rule and rotary phone. 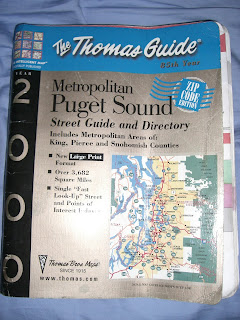