We did some spring cleaning a few months back and cleared out some of the debris in our garage. I went through a few boxes that hadn't been opened in a move or two and found this: 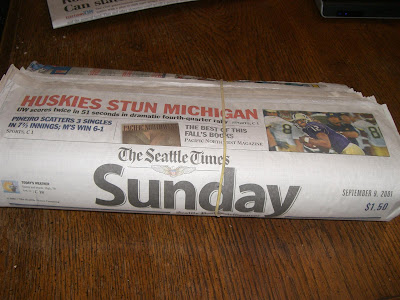 It is a newspaper from our wedding day seven years ago. It obviously had never been read, but I had stashed it away in a box as a keepsake. I thought it might be interesting to see what was going on in the world the day our new lives started. It was also a couple of days before 9/11 so it would be interesting to see what was in the news before America's world changed forever. Would there be that one article that summed up our innocence?

As you can see from the front page, 2001 was a long time ago. The Huskies had stunned the Wolverines for an opening day victory fresh off their last Rose Bowl appearance. The Mariners were 102 - 40 on their way to their record breaking season. Both programs have fallen far from these heights.

The cover stories were about the metamorphosis of Lake Union over the last 100 years, and about rural counties in Washington struggling with meth addicts. On page A9 is a story about the Bush administration looking at cutting the capital gains tax rate to stimulate the flagging economy.

In the business section, an economist and a reporter are discussing the economy over some coffee. The reporter had an interesting comment regarding the slumping economy "I've always thought we just have too much stuff. At some point, the economy has to catch its collective breath. Maybe that's another definition of recession." In the coming years, many Americans continued their pursuit of more stuff, and burned through their home equity to do it.

In the editorial section, there was an opinion piece titled "U.S. sees black and white, not gray. The first three paragraphs read:

The United States has no peer in world affairs in understanding and responding to an urgent challenge painted in black and white. German invaders, Soviet cosmonauts and Japanese exporters learned this lesson the hard way in the past century.

Grays, however, disorient American presidents and legislators as well as the public. Complex situations like the Balkans seem to confirm the Churchilian theory that Americans will always do the right thing after trying all other alternatives. Add the words "yes, but" to a description of good guy and bad guys in a foreign showdown and our minds wander.

This partly - but only partly - explains the difficulties successive U.S. governments have had in crafting coherent and effective policies to deal with the Persian Gulf countries, which simultaneously constitute an economic lifeline and a moral quagmire for Americans.

In the local news section there was a story from a columnist entitled "Fragile Line Between Life, Death". In it she describes how she was climbing Mount Baker, but her group was turned back before summiting because of rainy conditions. When she arrived home, she received a call from a friend asking if she was OK. It turns out that someone had died on the mountain that same day when three climbers fell into a crevasse. The "could've been me" feeling makes her reflect on the fragility of life like many of us will do a couple days later.

And the most bizarre entry was in the Parade section (click to enlarge). 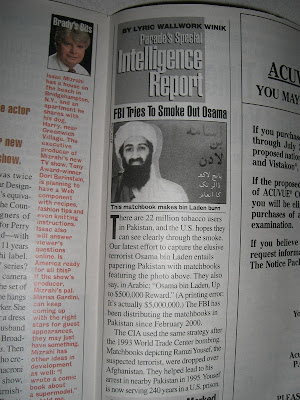 It is a story about the FBI printing Osama bin Laden's picture and the promise of a $5,000,000 reward for his capture on the cover of matchbooks. These matchbooks were distributed in Pakistan where 22 million tobacco users live in proximity with bin Laden's assumed hideout. Two days before the 9/11 attacks, and there his face is in the Parade section of all places.
Posted by Sean at Wednesday, September 10, 2008