So on a lunch break from painting, I went out to grab some lunch and a cup of coffee. I stopped by a Starbucks in Edmonds for a tall Americano. The barista asked if I wanted to try a cup of coffee brewed with the new Clover machine instead. I had heard about this high tech machine that brews a single cup of coffee much like a french press only better. What the heck, why not.

You choose from five different types of exotic sounding beans from a little menu describing their flavor notes. I think I picked an Ecuadorian coffee which was supposed to have hints of chocolate. When she rang me up, I found out it was $3.45 (I managed to pick the most expensive beans). She asked if I had seen the machine in action. No, let's check it out.

Here is the machine: 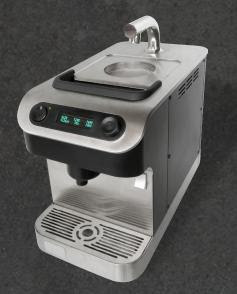 She had a different barista make the cup of coffee (a specialist no doubt). He measured out the beans on a digital scale, adding or subtracting a bean before he got it just right. After freshly grinding the beans, he dropped them into the circular opening on top of the machine.

As hot water poured out from the spigot, the circular opening dropped like a piston. He stirred the grounds and water mixture for a bit, and it steeped for about 30 seconds. Then the piston pushed back up as a vacuum sucked the coffee down through the mesh opening in the piston. The grounds were pushed up to the top of the machine in the shape of a hockey puck which he swept off with a squeegee.

After all this, how was the cup of coffee? Quite good actually. Probably not $3.50 good, but what cup of coffee is? Watching the machine in action was probably worth the price of admission though. I can totally appreciate Starbuck's goal of producing a truly high quality cup of coffee, and I might even splurge for one once in a while. But like a nice bottle of wine is a treat, I'm more likely to turn to 3 buck Chuck most of the time.
Posted by Sean at Wednesday, September 17, 2008

Last year during "Barista Jam" in Bellingham, I got to sample a coffee made from this machine. It is indeed quite a production (which is why it costs so much no doubt) and was pretty fun to watch.

Interesting that Starbucks is getting these!