The summer Olympics are about a week and a half old, and it has kept me up late just about every night. NBC's main coverage starts at 8:00 each night and runs past midnight most nights. I have the TV on while I work on the computer, and there have been some great competitions to keep me up late.

The opening ceremony was incredible. Michael Phelp's eight gold medal run has been an amazing thing to watch. 41 year old Dara Torres capturing two silver medals in her fifth Olympics. I am not a fan of any sport that requires scores from judges, but the gymnastic performances have been something to watch.

There are some silly events in there too. Not a fan of synchronized...well synchronized anything. I agree with Sean's term "novelty". And trampoline? Table tennis? BMX bike riding? I've also had about as much beach volleyball as I can take. NBC obviously picks and chooses what they think will get them the best ratings, but beach volleyball has been on every night.

I also don't think basketball, baseball or tennis belong there either. These sports have professional leagues of their own. Do they really belong at the Olympics? I like the original spirit of the Olympics as a competition between amateur athletes.

Still, I have watched (and enjoyed) more Olympic coverage this year than ever before. I am looking forward to seeing more track and field events in the next few days and the men's marathon to close out the Olympics.

Does anyone else think the gold medal looks a little iPod like? 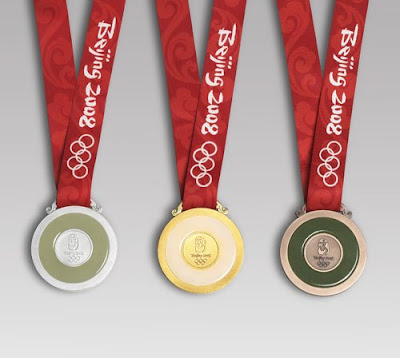 How about that zippy speedwalking competition last night (not sure if it was a cable channel or NBC)! Looked like gumby and pokey going for a walk on steriods....opps, didn't mean to mention the doping word.

Man, I feel the same way. I've been loving the Olympics this time around but the trampoline? Imagine the pride you must carry with you the rest of your life: "I won the bronze on the trampoline in Beijing, 2008."

But I did think the beach volleyball last night was all but riveting.