There was a great Mythbuster episode on last night. They set out to respond to the conspiracy theories that we never landed on the moon, and that it was all shot in a sound stage somewhere on Earth. According to a 1999 Gallup poll, about 6% of people don't believe we landed on the moon and about 5% are undecided. The theories they looked at (and busted) were:

Multiple light sources had to be present because:

1) The shadows are not parallel

Adam and Jamie recreated a scale model of the shot and showed that the uneven terrain can "bend" the shadows as shown in the photo below (not theirs). 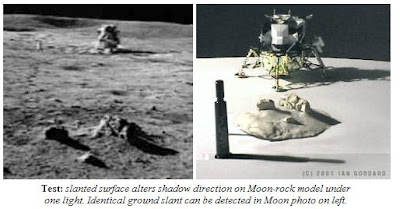 2) The astronaut is lit even though he is in the shadow of the lunar lander. 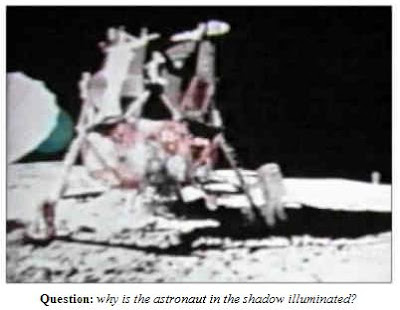 The Mythbusters used concrete and ash to replicate the reflective qualities of moon dust to within 1%. It showed that the astronaut could be illuminated by reflected light even though he stood in the shadow of the lander.

As there is no atmosphere and thus no moisture, the boot prints in the lunar surface would not be so distinct. 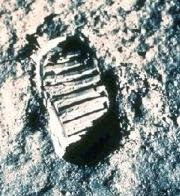 The Mythbusters did an initial test with wet and dry sand. Indeed the wet sand produced a much more distinct boot print. However, since there is no atmosphere or wind, moon dust is not smoothed from friction and erosion like sand on Earth. Moon dust is more jagged and can almost interlock to retain the shape of indentations. They tested this out in a vacuum chamber at NASA using material granularly similar to moon dust. The boot print was distinct.

There is no atmosphere and no wind - why is the flag seen waving in moon landing video.

There is a metal rod at the top of the flag to keep it from drooping. The video is of the astronauts placing the flag into the lunar surface. Another trip to the vacuum chamber showed that when the flag is rotated a bit when putting it in place, it continues to flutter for some time with no atmospheric resistance.

The "floating" look of the moon walk could have been a higher frame rate in filming rather than low gravity.

Adam and Jamie tried to duplicate the look by using a higher frame rate and using a harness to actually simulate 1/6 gravity. Though their results were somewhat similar, it was clearly not as smooth and could not be called floating. They then went up in a plane that produces weightlessness by climbing and diving in a parabolic arc. They adjusted the trajectory of the flight plan to simulate the moons gravity. They then did their moon walk and the results were very much like the footage from the moon landing.

Finally, for a little more proof they went to an observatory. Astronauts left behind on the lunar surface what is essentially a big reflector. At the observatory they shot a high powered laser at the moon. First it was aimed in an area we have not been to. No real bounce back. Then it was aimed at the spot where they knew the reflector sat, and they measured a noticeable reflection of the laser's light.

It was a very interesting episode. Even though I have pretty much described it all, it is worth catching in rerun.
Posted by Sean at Thursday, August 28, 2008

oh crap! i had hoped that you had not seen that one. scott and I were in such odds over it. yes, i am one of those conspiracy theory people. i am sure you are not shocked at that news, huh? :-)