I have this weird thing with vacations, and maybe anticipation in general.
For vacations, it isn't real until I check in at the airport, or drive away with a loaded up car. Something can always go wrong I suppose, so don't spend the energy on anticipation. But once vacation brain is turned on, I am all in. A switch is thrown and living in the moment is where I want to be.
This trip is a little different, while being more of the same for my pre-vacation brain.
There is much more planning involved this time around, though to be fair a lot of it is being done by the people I am joining. This time I can't wait until the last minute to run to the store, pack my bag, procrastinate as is my habit. There are just too many boxes to be checked, and small boxes to squeeze into.
I am going on a two week bicycle trip through France. I leave in about a week.
My cousins have been planning this trip for quite some time. I can't remember when they first told me about it, but in the first sentence or two they said, "You should join us!"
Yes, yes I should.
There have been other opportunities to join friends on some cool trips before. I went on a number of them, but I have passed on couple I definitely regret, like the trips to Hawaii and Ireland. There were valid or semi-valid reasons to not go at the time, but I didn't want to let this one slip by and live to regret it. This trip is one I know I will love, but probably wouldn't have planned on my own, and I am so excited to travel with Rick and Liz.
Their ride started in Portugal and they have been biking for almost a month now. They are currently in France, biking from Bordeaux to Paris, which is where I will join them. After a day in the city, we will ride west to the Normandy area on the coast. We will then head north along the coastline toward Dunkirk. There are general plans, but no set schedule of how far we will ride each day, or where we will stop each night. My sense is that they have been planning a few days out, but remaining flexible to hiccups and joys that make them pause or change their plans. I am not sure of how far I will get in the two weeks I will be with them, but at some point I will have to peel off and hop a train back to Paris to fly home. They will continue on to eventually finish in Amsterdam.
Even though there has been planning in the background, I didn't tell a lot of people about the trip. Beyond the usual things that can throw a wrench in your plans, Covid has kept its two-plus year hold on things. Add to that my arthritic hip, and I wasn't sure how getting on the bike would feel. The answer is not great so far, but that is a story for another post.
The hurdles can still trip me up, but the excitement is building. I have been fortunate to travel to some cool places in my life, and have even taken week-long and two-week-long bike trips in the past. However, it has been fifteen years since the last long bike ride, and it will be almost exactly 30 years since I was last in Europe. It feels crazy when I say things like "it has been 30 years since I...", but getting older doesn't mean getting old (just yet). Right?
For at least a couple of weeks, the Views From Two Wheels blog will be a bit more literal. 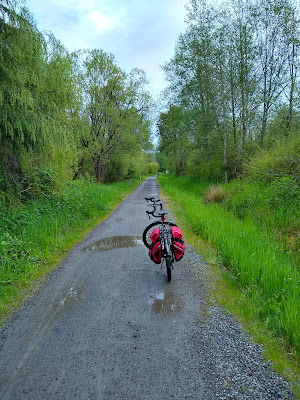 We can’t wait for you to join us!! So glad you said yes!!