Getting my gear in gear

The previous times I've done multi-day bike trips were a two week ride from Seattle to San Francisco in 2006, and one a week ride loop from Whitefish Montana to Canada and back to the US through Waterton Lakes and Glacier National Park in 2007. Both were amazing experiences I will never forget.

Both were also charity rides for the American Lung Association. The first ride in 2006, I didn't know a soul on the trip when I started, but within a few days it felt like the other riders were already friends. Many of those riders signed up for the Glacier ride the next year, and it was a wonderful reunion ride through a spectacular part of the country.

On both of those trips, we were camping. Each night you set up the tent, rolled out your sleeping bag, and in the morning you did everything in reverse to break camp. But, there was a support truck that followed along, so we didn't have to carry anything beyond what we needed for each day's ride. We would throw our duffel bag in the U-Haul in the morning, and grab the duffel bag out of the pile when we rode into camp each night. Rinse and repeat.

This trip in France we aren't camping, instead staying in hostels or cheap hotels, but there will be no SAG wagon following behind us carrying our stuff like a mechanical Sherpa. Everything from start to finish needs to fit on the bike.

I originally planned on using the same road bike that I used for the charity rides, just needing to figure out how to retro-fit racks to carry things. However, I found out there were going to be a number of sections where we were riding on dirt and gravel, and my skinny tire road bike wasn't going to work very well.

A buddy loaned me his mountain/hybrid bike that had wide tires and a rack, but it was too big. I looked for used bikes in every shop and also online, but couldn't find anything that seemed to be a good fit. The more I looked, the more I didn't want to get something that would only sorta work. I didn't want to fly all the way there, for basically a once in a lifetime kind of trip, and be miserable on an ill-fitting bike.

So I bought another bike.

The bike is specifically designed for touring. Lots of places to bolt on racks and fenders, wide tires to tackle any terrain, and a steel frame that will probably outlive me. Ever since those charity rides fifteen years ago, I have wanted to do another long distance ride. Take off for a week, camp out and unplug. See the contours of the land at a much slower pace. This trip finally gave me the push to get set up to do just that, so now no excuses.

The bike is basically set up now. I took a few things off my road bike, and bought what I couldn't scrounge. Rick and Liz had some extra panniers (saddle bags) they loaned me, so I that was a big help. 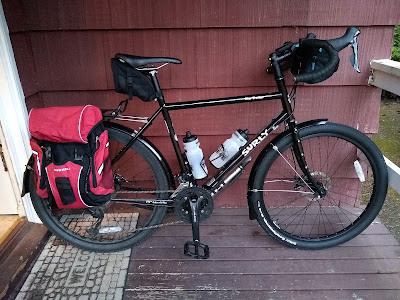 It seems there are a hundred tiny things I still need to do and get to be ready, but the big pieces are in place.

One of the remaining hurdles is fitting it all in. I chronically overpack, and this is not a trip where that is going to work out. Room is limited, and anything I carry, I have to carry over each hill I ride. I'd like to think I have learned my lesson to pack light, and only the essentials from previous backpacking trips, but I can be a slow learner sometimes.

Looks great!! All you really need is a tool bag, water, wallet and passport. And cycling shorts. You’re ready!!

Looking forward to seeing you next Wednesday in Paris!

Looks like you are ready!!! Can't wait to hear about this adventure!!!