The mountain in the distance

There are bucket-list items that toy with your brain, plans percolating in the background for "someday". the STP and running a marathon were the big ones for me, but I never did anything about them until the incident with the sunburned knees. Cherie set the hook for both biking and running, and I have been playing out the line for as far as it will take me.

As I have mentioned before, my path has been guided by a series of gentle shoves. Challenges have been made, gauntlets have been thrown down, and for the past decade I have been finding new ways to stretch my limits and celebrate this body I have been given.

There has been a ride lurking on my bucket-list for several years. It was this mythical ride that sat out on the horizon (quite literally), a ride that only the strongest could conquer. It had its own acronym, and it was emblazoned on reflective bands wrapped around seat posts of finishers. When you see the yellow strip on the bike rolling beside you, you know that the rider has gone where few have (or get to) tread.

The event is Ride Around Mount Rainier in One Day, or RAMROD for short. Like the mountain that stands so singularly on the horizon, RAMROD was the one ride that stood alone as a challenge for those that like to climb hills.

Already planning on the one-day STP, Tom proposed we get our place in line for RAMROD. Though one of the most difficult rides in the state, RAMROD is so popular that there is a lottery each year just to get in. The route runs along National Park roads, so the permit limits it to 800 riders and requires that it be held mid-week to avoid the largest crowds. If you fail to get in, your odds improve for each successive year, and if you volunteer, your odds improve another notch. So we threw our names in the hat and planned to volunteer in hopes of getting in next year.

Well, we "won" the lottery, and the three of us (Tom, Joe and myself) got in on the first try. What I didn't realize until later, was that the STP and RAMROD were only a week and a half apart. Assuming we could make it the 200 miles from Seattle to Portland, we now had a ride that was at least twice as difficult 11 days later.

What had we gotten ourselves into? 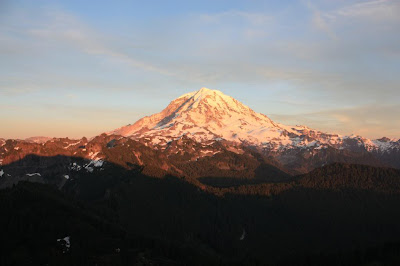