Off the Beaton path

I just spent five days out in the woods, off the grid, away from it all and back to nature. It was wonderful and painful.

Though I have camped quite a bit as an adult, it has become a bit more posh each time we head out. Long gone are the days of hot dogs over the fire, usually eating as good or better in the woods than at home. Cars are filled a bit more with luxuries from home, and most have left behind tents and have upgraded to trailers. This trip was back to the roots of taking only what you can carry in and out.

Cherie's dad Jim (Beaton) has been hiking and fishing all his life, and first went to Delta Lake in 1965. He went back several times over the years with varying sets of friends and eventually his family, He took Cherie back to the lake in 2009, and she told me how beautiful the area was, and how difficult it was to get there. They brought along her son Dalton last year, so three generations shared the hidden gem side by side. This year Brian and I were invited along, and like the pictures that fail to do it justice, her stories about the joy and pain of the trek did not do the experience justice.

I hadn't done an overnight hike since I was a pre-teen, and didn't have any of the necessary equipment. They had all the tents, pack stoves and water purifiers we needed, so I borrowed a backpack from Jim, and bought some cheap hiking boots from Big 5 a couple of days before we headed out. After the months of biking and now running, I figured I was in pretty good shape, but like the foolishness of buying hiking boots days before heading out, I was mistaken that I was prepared for the challenge.

We headed out early Wednesday, driving two hours to the trail head, arriving at around ten o'clock. We were disappointed to see so many cars and trucks in the lot. There was apparently one particular spot on the lake that we were shooting for. The main trail leads to five different lakes, and ours was off the groomed trail, so we hoped that all the early arrivals were headed somewhere else.


Trout lake was the first lake on the trail, about a mile and a half into the woods. This would be the easiest part of the hike, but it was still challenging to muscle my 55 pound pack up the trail. I can be blamed for over packing on most trips, but but much of the weight was from the inflatable raft I was carrying. Jim had always fished on the lake, and it could not be easily done from shore. Dalton carried another raft on his back, and the gear was spread among the five of us, but my pack was some ten or fifteen pounds heavier than the others. The boat also had to be strapped low on the pack, so my center of gravity was definitely off.

We stopped at Trout Lake to rest, grab a drink and snack on some trail food. Though there were probably some campers off in the woods, we didn't see anyone around. We had seen one couple on the trail, walking out with their dog, but it would be the only people we would see for three days.

Shortly after leaving the lake, the trail climbed through some steep switchbacks. After about a half a mile, we left the groomed trail and would spend the next six hours bushwhacking along an unmaintained fisherman's trail. We actually went downhill initially to find a place to cross the river. We spent a few moments there to take pictures and wet our bandanas and then headed into the wilderness. As Jim said, this is where it got "interesting."

Calling the route we went a 'trail' might be a little generous. Though at times it was clear where someone had walked before, it was often overgrown and branches surrounded you like a swarm of insects, stinging and scratching. Other times we were scrambling under and over logs, climbing through rock fields, and without practiced eyes of those that had been there before, I am sure we would have become lost along the way.

The route was steep enough at times that you had to grab at tree roots to climb the hill like a ladder, eyes turned constantly downward looking for the next safe place to plant your foot. There were some great spots near the river and several beautiful waterfalls where we could pause to catch our breath, and the scale of the rocks and trees had me thinking we were hiking through Tolkien's Middle Earth. Each time we headed out again, Jim would comment that the next part was more "interesting" (translation, hard).

After one final difficult section we were at the lake. Unfortunately we had another forty-five minutes to an hour of up and down hiking to get to our spot. Thankfully, when we arrived, there was no one there. I am not sure how we would have taken it if we had to continue on or backtrack to find a place to set up camp.

That first night we didn't do much more than set up camp, make dinner and head to bed shortly after the sun went down. Dinners were of the freeze-dried variety, but they actually turned out to taste pretty good. The first night we had lasagna and it was fantastic, though when we tasted another batch a few days later, the taste of the first batch greatly benefited from having hiked for seven and a half hours.

We spent Thursday further setting up camp, fishing and exploring. We had both boats out on the lake and moderate success, but we designated Saturday as our keeper day, so we threw back all but one that had swallowed the hook. The water was so calm and clear, you could see the fish following your spinner through the water.

We beached the boats on the other side of the lake near the base of one of the two falls feeding the lake. Dalton immediately began scrambling up the waterfalls, and after some hesitation, the older kids followed his lead. Where he was fearlessly leaping from rock to boulder, we were not as daring or limber, so there was more hesitation and four-point stances. But it was worth it when we made it to the base of the lower sheer face.


On Friday, Jim, Dalton and I hiked up to Otter Lake. It was another bushwhacking and scrambling adventure to an even more remote lake. More challenge, more beauty, farther off the beaten path. 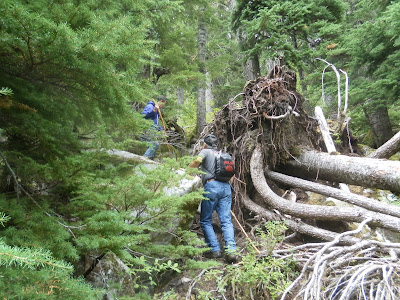 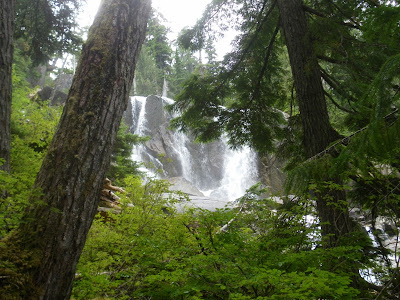 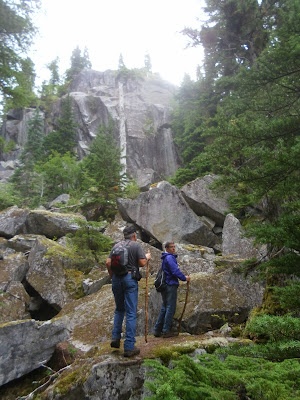 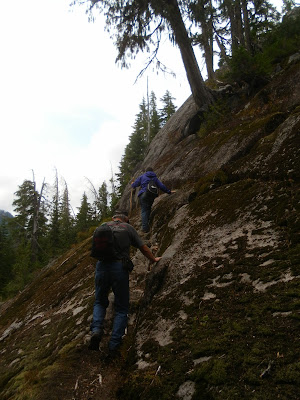 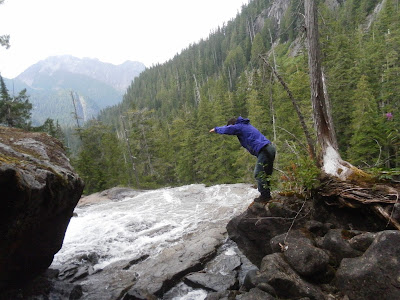 Halfway to the lake, there was a great overlook of Delta Lake. Then it was on to Otter Lake. 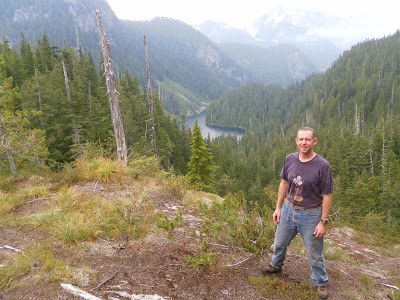 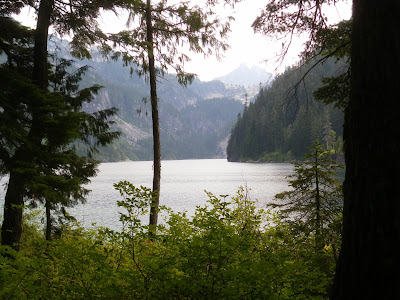 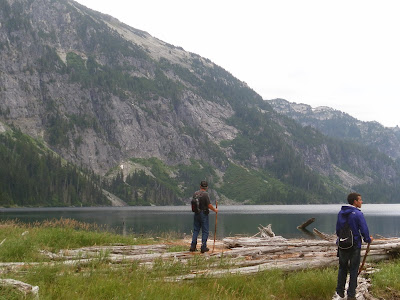 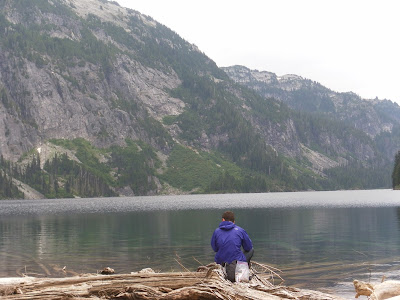 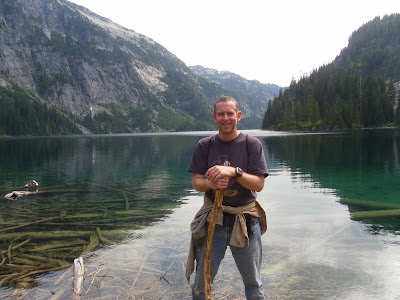 Saturday was a little more relaxed. We also saw people for the first time in days. Three guys were hiking through to Otter Lake. They had hiked up in the dark and camped out on the north end of Delta the night before. The hike up the hill was difficult and the trail hard enough to find, that I can't imagine doing it in the dark.

We spent the day fishing and hiking around the lake. Near the southern end, we found a stack of huge boulders, so naturally we had to climb them. There was a good view of the falls off of Angeline Lake, so we just spent a little time relaxing in the sun. There was also another example of the determination of the trees. In many places, they would grow right on top of the rocks 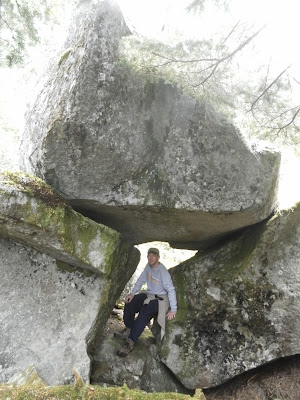 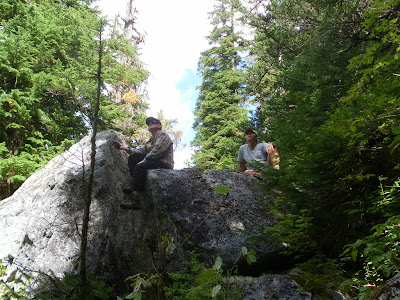 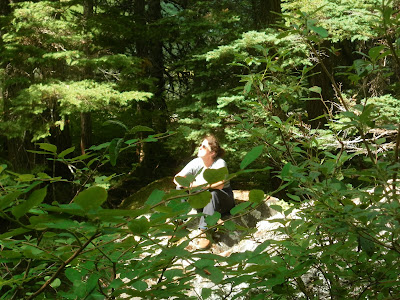 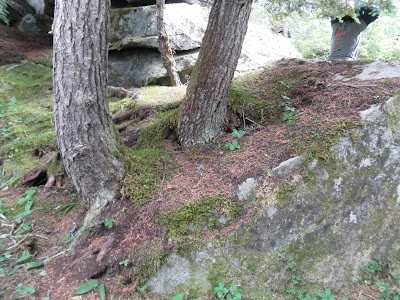 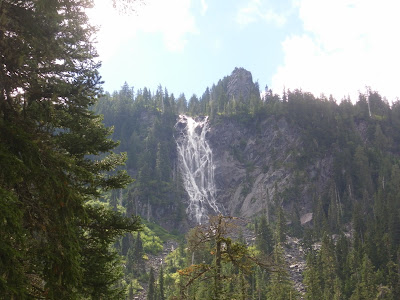 Jim had hiked in with a cold/flu bug, and after a few nights of sharing a tent, Dalton and I woke up with it as well. It took hold Friday night, and we both woke up Sunday morning feeling sick. Completely stuffed up, and feeling the feverish aches, it would be a long hike out.

Of course it was mostly downhill, but what was difficult to climb was a bit precarious to descend. The packs were a slightly lighter for the food we had eaten, but they were still hard to maneuver and a strain on the back. We took at least as many breaks on the way down, but each time I put the pack back on it seemed heavier still. Brian then stepped on a nest of bees and was stung several times as he crashed through the woods trying to get away. We were a motley lot.

We climbed a steep rise and were back on the groomed trail. Only two miles to go on a much easier path, but I was done in. I was feeling feverishly spacey, and my everything hurt. We made a final stop near this enormous tree so I could take in some more fluids and food. 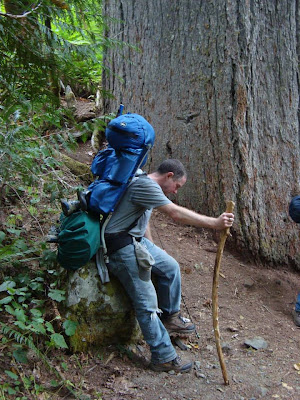 When I put my pack back on, I tweaked something in my left hip. For the last three quarters of a mile, every other step hurt. With my more awkward gait, my back started to spasm.

I went to that place I go at the end of a marathon, where I try to mask pain with will and determination, but I went too far this time. As soon as I reached the truck and got the pack off, I started hyperventilating. It had hurt too much for too long, and something finally broke. I should have stopped, probably eaten or drank more, maybe traded packs with someone. I was sick and I shouldn't have tried to push through it. It was a mistake, and I was sorry to freak everyone out at the end of a great adventure.

We hung out in the parking lot while I took in some fluids and ate something. Initially I couldn't even lift my water bottle with my right hand without sending my back into spasm. A park ranger came by and the others chatted with him for a bit. While he was talking about another remote lake, he mentioned that only about 36 people each season hike into Delta and Otter Lake. While standing on the shore of Otter, I wondered how many eyes had seen this place, and it was great to hear that we were such rare visitors.

I am grateful that Jim invited me along with his family to hike into such a cherished place. It is not only beautifully remote, but it holds a great place in his heart, and I am fortunate to now share in it. If he heads back, I will join him, but I will definitely come better prepared next time to enjoy it all the way through. 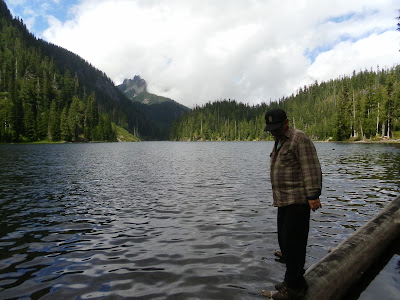 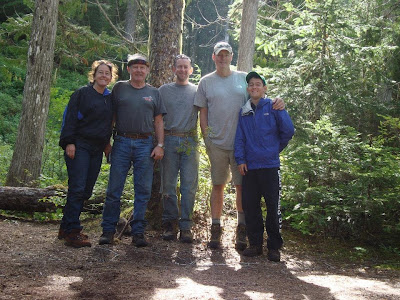