The animals made a monkey out of me

Out of town, out of touch, out of practice - my excuses for not writing. I was house-sitting for friends this past week, taking care of house and all manner of animal, and the animals did not make it easy. Even the tortoise wasn't cooperating.

Tuesday morning, my own forgetfulness created a 200 mile day of driving when I forgot to pack Sierra's insulin. Then I spent Tuesday night chasing down the wrong cat.

When I drove up to the house, there were two cats sitting outside. I knew the orange cat did not belong, but I wasn't sure about the black one. I couldn't find my friend's black cat anywhere in the house, so I started looking for the black cat outside. He would come close, but then dart away, teasing, but avoiding my attempts to get it inside. Thankfully, he knew he didn't belong, and I eventually found the right cat hiding in a duffel bag under a bed.

Wednesday started out quietly, and ended with a bit of a fizzle. After logging another day of running, I spent the morning at the house tending to the animals and reading in the sun. Then I headed down to San Diego to spend the 4th with some friends. We had a great BBQ before driving to a better vantage point to see the fireworks. As you may have read, all the fireworks at three separate shows went off at once, and early at that. What was supposed to be a 18 minute show, was over in 15 seconds (video) We were still in the car when it happened, and didn't find out for another 20 minutes that what we thought was a preview, was all that was happening. Fortunately we hadn't driven far, and we were able to get back to catch the nightly fireworks at Sea World.

Thursday was the first time I had left Sierra alone all day, and she panicked in the unfamiliar surroundings of this new house. As I have mentioned before, her sight and hearing are very poor these days, and I found her scared and yelping at the bottom of the stairs. I can only assume she had been looking for me, and had made a bit of a mess of the downstairs in the process. I was a little worried about leaving her alone again on Friday, but was happy to arrive home to find her calm and everything in order. And then the cats escaped.

Sierra and I were enjoying a read and a lie on the grass (me reading, she on the grass) when the black cat that I had only seen once all week, darted across the lawn. In the ten minutes we had been outside, she suddenly became brave enough to come downstairs and nose open the screen door. Then while I was leaning out the front door, shaking the bag of kitty treats to entice her back, the second one escaped. It was a comedy of errors, but the cats were the only ones laughing.

After a couple of hours, I was eventually able to corral the second escapee, but the first one was nowhere to be found. After some slightly panicked text messages to my friends, they assured me that she would nose her way back in if I just ignored her and left the screen door unlocked.

I was awakened by fireworks at 3am Saturday morning (a neighbor was apparently trying to make up for the dud in San Diego). I noticed the screen door had been nudged open, so apparently the cat does come back, the very next day. I searched the house that night and the next morning, but once again she had found a secret hiding place. I assumed she was there, but couldn't be sure.

I finally found her new hiding place Saturday night, and snapped this picture to send to my out-of-town friends to let them know she was safe and sound. I know it is just the flash reflecting off of her retinas, but c'mon, doesn't she look a little evil. 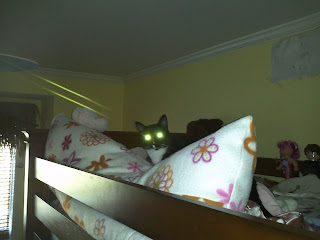 It was great to be away for a bit, and I know Sierra enjoyed the big backyard with no steps, but now I am back home, and back at it. This morning was the 27th day in a row of running, and I have been cleaning up some of the debris of life that has been piling up. The habit of running is ingrained again, and writing is the next on the list. Thanks for checking back after all the silence.