Relax. Don't Worry. Have a homebrew

So after learning more about quality beer, I finally decided to take the plunge on brewing my own. Homebrewing has been clanging around in the back of my brain for a decade or two, but I never pulled the trigger. The other Sean has been back to homebrewing for more than a year now, so along with the inspiration of the brewery tour, I had been hearing about his first hand experience. I had also been sampling his homebrews, including the excellent porter he created in honor of my birthday last year.

I found a good brewing kit on Craigslist for about a third of the price of what it was at the local shop. The kit was actually sent out as a prize from a Sam Adams contest, but the winner passed it along to her son, who then sold it to me. I had nearly everything to brew all in one big box, including a book and DVD on how to do it. I watched the DVD, read the beginners section of the book, and then helped (watched) Sean brew a batch of his own. Seeing him in action made it less intimidating. At its core, brewing beer is remarkably simple - you prepare a sugary mixture, add some yeast, and the yeast converts the sugars to alcohol and CO2. There are only four basic ingredients (water, malted grain, yeast, and hops), but of course you can make it as complicated as you want.

With thousands of recipes in books and online, each with variations on types and amounts of grains and hops, you can get overwhelmed by the choices. My kit included the ingredients for a basic ale for the first batch, but from the shipping label it looked like it had been sitting around for 9 months. I decided not to risk it, and planned to get fresh ingredients.

But what to brew? I decided on a recipe that said it was a clone of Red Hook ESB, one of the early craft brews and a staple back in Seattle. Recipe in hand, I walked into the local brew shop and fessed up that I was a newbie. The guy was happy to help me out, locating the appropriate grains, and showing me the proper way to measure and grind them. He chatted me up about my approaching first attempt, and even gave me a 10% discount on ingredients and tools. Here we go.

The Complete Joy of Homebrewing describes in great detail all the things that you need to focus on to make a good homebrew. You need to pay close attention to time, temperature, and most of all, to sanitation. He emphasizes the importance of each step, but then puts you at ease by saying, "Relax. Don't Worry. Have a homebrew." Although these things are important to the beer coming out right, it is forgiving of a little variance. Relax, it is just beer.

So the basic process is to steep the grains, much like making a large cup of tea. 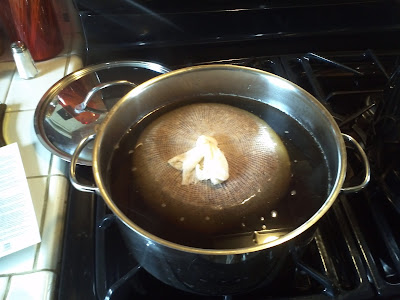 Add in extra sugary goodness (unless you are only using grains) Measure out some hops for bitterness and aroma. 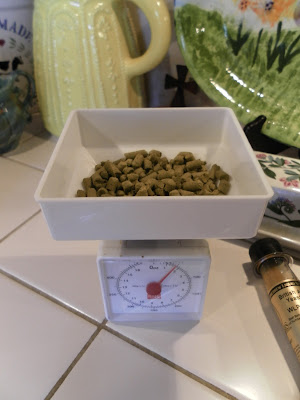 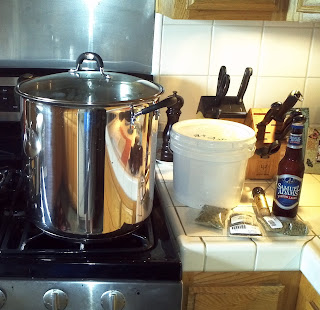 (You are encouraged to have a beer, while you are brewing beer. Preferably it would be similar to the one you are brewing, but the store was out of Red Hook. Since it was originally a Sam Adams brew kit, I thought it was a good second choice.)

After the boiling, the mixture has to be cooled (preferably quickly) to about 70 degrees. Each yeast strain is a little different, but if the water is too cool, the yeast won't activate as well. If the water is too hot, you risk killing the yeast before it ever had a chance to do its thing. Things have to be just right, more or less (relax, have a homebrew).

Once the yeast is in, the soon-to-be-beer is sealed up. A one-way valve is attached so the CO2 can get out, but no contaminants can get in. It perks along for a couple of weeks until a majority of the sugars are used up. 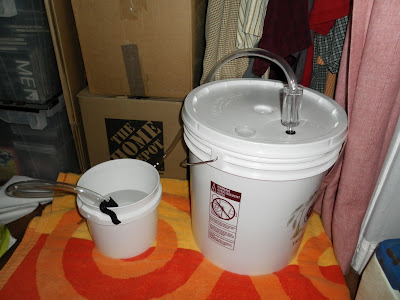 You can transfer it to a new container half way through to get it away from some of the sediment, which is what I did this weekend. 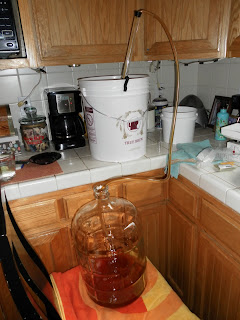 In another week or so, it will be time for bottling. The beer conditions and carbonates in the bottles for two weeks, and then it is ready to enjoy and share with your friends.I am excited to see how the first batch turns out, and I am already searching for the next recipe.

This could turn out to be a fun hobby. Similar to cooking, it combines the structure of a recipe, with the freedom to modify and be creative when you get more confident (or when you make a happy mistake). There is lots of measuring equipment reminiscent of a chemistry set, and lots of numbers to track if you are so inclined (which I am). And like so many other hobbies, there is a passionate community ready to nerd out with you. Again, you can make it as complicated as you want, or you can simply relax, and have a homebrew.

Stop by in three weeks, and I will have a cold one waiting for you.

Email ThisBlogThis!Share to TwitterShare to FacebookShare to Pinterest
Labels: friends, homebrewing, picture of the day