Woke up to a rainy morning, more typical of Seattle than San Diego.

I will catch myself once in a while, slightly dumb-founded that I live in California. For the first 42 years of my life, I lived within a 25 mile circle. My family did not move around when I was younger, I went to college near home, I did not get a job that required me to pull up stakes. I stayed home.

These days I drive fifty miles to work, along highways carved through rocky hillsides dotted with avocado trees. I carry my 70 pound dog up and down concrete steps so she can pee near a palm tree. I run along the ocean past tourists who traveled miles and time zones to get here. Rain is an aberration and I wear shorts year round.

It was a thousand decisions, great and small, in my control and not that lead me here. Of course this is true of everyone's life. You never know what would have happened if you turned left instead of right that day. There are obvious ones that lead me to San Diego, but I have been thinking farther back recently.

In the summer of 1992, I had just returned from a trip of a lifetime after graduating from college. My brother and I spent more than a month on a whirlwind trip across Europe. It was an incredible adventure that I don't imagine I will ever repeat.

When I returned, I did not have a job or a place to live. I moved in with my folks for a couple of months while I looked for work and saved up some money.

I applied for work in a few local restaurants. Two called back. The Keg called first, and though I gave a stupid answer when they asked during the interview why I chose the Keg (because it was close), they hired me. I met many great people, and most all of my friends can be traced back there by one or two degrees of separation.

When you think of a phone call that changed your life, this is not what you would picture. But if Billy McHale's had called first, I never would have met all these people or had the same adventures. I would not have met my former wife or the woman I am with today. I would not have met the couple I live with, nor the man I work beside, had I not worked at the Keg.

I try not to obsess over the endless 'what-ifs' of it all, but I have been known to ruminate over regret. I am doing much better these days, but every so often I slip back into bad habits, and through a confluence of factors, that is what happened this week. I spiraled, I self-berated, I carried it under the surface and was a jerk at work on Thursday.

Kristy is out of town, and I am house sitting and taking care of the old dogs. I have had a place to myself for the first time in a while. I was looking forward to some solitude and getting lots of writing done, but I have felt more like a hermit. I've barely been running, and the writing hasn't been much better. I have dug myself into another hole this year, and I need to claw my way back out.

I posted on Facebook a shot of a sunset from the back deck along with the quotes from Seneca, 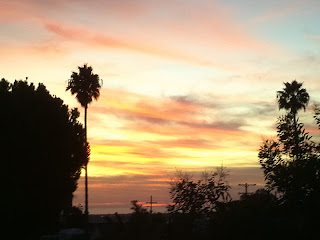 ‎"Begin at once to live, and count each separate day as a separate life."
"Every new beginning comes from some other beginning's end."
This week I regressed, but tomorrow is a new day, next week is a new week. Maybe I needed to go through this valley to remind myself how miserable I used to be when I shut myself off and hid away like a hermit. To remember all I need to be thankful for in this season of Thanksgiving.

I am thankful for my family and friends, here and a thousand miles away. I wish I could bring these two places together somehow, especially during the holiday season. I am thankful for a temporary job that lasted a decade and introduced me to all of you. And I am thankful that Billy McHale's didn't call first .

Me too! Glad to hear the pooch is doing better!