George Carlin once said, "...A leftover. What a sad word that is. Leftover. How would you like to be...a leftover? Well, it wouldn't be bad if they were taking people out to be shot!"

Well the four day eating marathon is over, but the food is not nearly gone. There were many hits, and only one miss.

As mentioned earlier, after going out for dinner on Thanksgiving, Kristy and I made a turkey dinner for two on Friday. Turkey, cornbread stuffing, homemade cranberry sauce, mashed potatoes with horseradish, and pie for desert. Everything was wonderful, though I sort of missed the store-bought cranberry sauce in the shape of a can for nostalgia sake.

She bought the smallest turkey available, but even so there were plenty of leftovers. But of course this was part of the plan. Oh the turkey sandwiches! Saturday's selection was turkey, cranberry sauce and melted gouda on soft ciabatta bread. Sunday we had grilled turkey paninis with thick pickles and horseradish butter.

The only miss was when we tried to make Wassail. We forgot it on the stove, and it turned into this creepy oozing mass of black goo. It was bubbling and collapsing in on itself like something out of Harry Potter. I think the remains are permanently burned into the pan. 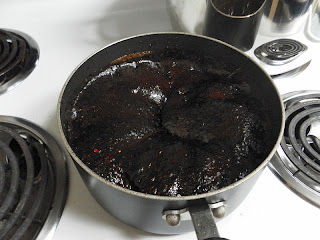 I think we have only put a small dent in the supply of turkey, but the leftovers keep coming. We had dinner with Matt and Holly on Sunday, and we did a full ham dinner with all new side dishes. I think we made it through most of the yams and veggie casserole (and the mulled wine), but there was so much ham leftover that each house now has a big Tupperware full.


George Carlin again - "Leftovers make you feel good twice. First, when you put it away, you feel thrifty and intelligent: ‘I’m saving food!’

Then a month later when blue hair is growing out of the ham, and you throw it away, you feel really intelligent: ‘I’m saving my life!’"

Somehow through all of this, I managed to not gain a pound. Inconceivable!