Have you heard of Meatless Mondays? It is a pledge to not eat meat one day a week for health and environmental reasons. By just making this small change, you can have a big impact.

From the Environmental Working Group Report:


Americans’ appetite for meat and dairy – billions of pounds a year from billions of animals – takes a toll on our health, the environment, climate and animal welfare. Producing all this meat and dairy requires large amounts of pesticides, chemical fertilizer, fuel, feed and water. It also generates greenhouse gases and large amounts of toxic manure and wastewater that pollute groundwater, rivers, streams and, ultimately, the ocean. In addition, eating large quantities of beef and processed meats increases your exposure to toxins and is linked to higher rates of health problems, including heart disease, cancer and obesity.

Grass fed, organic and pasture raised meat, eggs and dairy can reduce your exposure to harmful chemicals, and they have been shown to have higher vitamin content and lower saturated fat. Unfortunately, it does not reduce the environmental impacts in the same way. However, the type of meat you choose can make a difference. Chicken, turkey and fish have a much smaller impact than beef or lamb (or even cheese).

So this brings us to Meatless Mondays. According to the same report:
Whatever your motivation - health, environment or simply your grocery bill, giving up meat one day a week does not seem like it should be that difficult. I think that this is something I can do indefinitely. But for the August challenge, I will flip it around and instead of giving up meat one day a week, I will only have it one day a week. I will probably choose Saturdays as this is the day I typically do my long runs, and when there will be the most muscle damage in need of protein repair.

I think this will not only give me a good jump start toward a lifelong commitment, but will help me to continue the weight loss challenge. It should also broaden my culinary horizons and increase the variety of foods that I put in my body. 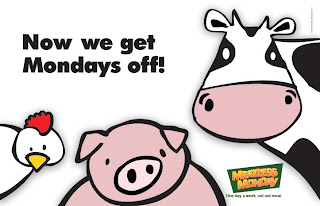 Email ThisBlogThis!Share to TwitterShare to FacebookShare to Pinterest
Labels: a better me, monthly resolutions

Once again science is finally catching up with the church - the church has been meatless on Fridays for 2000 years: (just one of the first google results I came across) http://www.secondexodus.com/html/catholicdefinitions/fridayabstinence.htm

Yes, if only science would 'catch up' to the church.

I have been reading a lot lately about health/digestion and came across the concept of Meatless Mondays. I think it started with the NY school district. Anyway, I just started it myself, but I am just doing one day. You are a rockstar for attempting 6 days! It will be interesting to hear how you do with meat only once per week. Good luck!