Christmas has always been my favorite time of year, but the meaning has changed over the years.

Of course as a kid you counted down the days until Christmas morning, and it seemed to take forever. You folded pages over in the Sears catalog (dating myself) and wrote everything down so you could pass on your wishes to Santa. I can remember sneaking candy canes off the tree every day. I would start with the ones in the back, thinking that I was so clever, but of course nobody was fooled when there were none remaining by Christmas morning. And of course there is that moment when the image of Santa changes in a kid's mind. I still remember seeing a present under my parents bed that later showed up with a tag from Santa. I don't think I have snooped for a present since.

As an adult, the month of December seems to fly by. As the schedule filled up more and more each year, it was harder to ease into the holiday, and a little more of the magic dissipated. It was still a wonderful day, but it took on the sense of deadline to be met rather than the pinnacle of a wonderful journey.

But in the past I did my best to stay in the moment and actually enjoyed shopping for people. I would put in my favorite Christmas CD and that would be the signal that the season had begun. The first time to the mall, I would wander around looking for ideas and inspiration. I would spend several hours that first day and buy absolutely nothing. And I loved it.

The past couple of years my family has skipped exchanging gifts. It was partly the economy and also realizing that we already had so much stuff. Christmas morning is now entirely about time spent with each other, and it is wonderful. It was never about the gifts, but at the same time, it does feel a little odd not to have that not part of the season. I think it is better this way, it is just different.

A friend recently posted something on Facebook. A nine year relationship has ended recently, and she wondered if a Christmas tree would make her happy or sad. I understand completely. Just shopping for and putting up a tree by yourself, when in the past there has been someone with you is difficult. And then you take out the ornaments and other decorations that chronicle your life, and the meaning is totally different. I had not had to face that challenge myself yet. Last year we sold the house November 30th and I was at my parent's house in December. This year I was in San Diego while trees are going up and I will be back at my parent's for Christmas morning.

But yesterday, I was down at the storage unit going through our Christmas stuff. I had offered to send down J's personal and childhood ornaments this year. I was a task that we had both put off, and of course it was difficult to go through our things once again. After seven or eight years, your tree tells a story, and it was what Christmas had come to mean. But like the other things I've mentioned, the meaning has changed.

Since I was going to be in someone else's house for Christmas again, I was going to have a pass on the decision of whether or not to put up a tree. But after going through most difficult part of opening up the boxes, I decided "what the heck" and grabbed a few of my own ornaments. My friends Holly and Kristy had given me some ornaments before leaving San Diego, and I had brought them up with me as well. I bought a small Christmas shrub at Home Depot, put in that favorite CD that I hadn't played yet, and decorated my own little Charlie Brown tree. 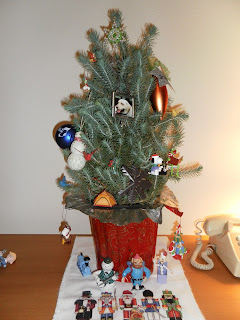 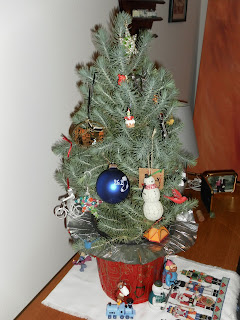 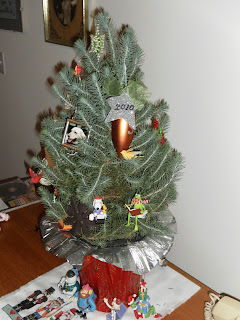 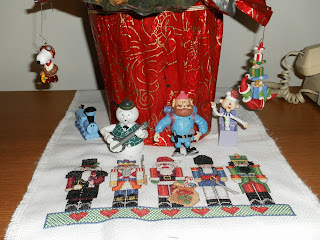 It is a little different each year, but it is still Christmas. And there is still some magic left.
Posted by Sean at Friday, December 17, 2010