It is hard to believe Christmas Eve is already here. As is tradition, I left some things to be done to the last minute and I was certainly not alone. Places were filled with procrastinators and the most difficult thing to find at the last minute was a place to park.

Tasks completed, I stopped into Starbucks for another free cup of coffee, and though it was busy, the feeling was quite different. Friends were there to exchange gifts and just spend time with each other a day away from Christmas. A mother shared a cup of coffee with her daughter as the grandchild wandered around greeting each table. Baristas ending their shift went around to other workers and regulars to wish them a Merry Christmas since this was the last time they would see each other before the holiday. The coffee shop seemed to be a little hideout from the last-minute chaos just outside the doorway, and I found myself setting aside my notebook just to enjoy the atmosphere.

Yesterday, one more tradition was observed. A few of us played a round of golf for the "Scott Phibbs what the heck are we playing golf in December" tournament. About every other year, a few of us gather to brave the elements to play a round of golf a couple of days before Christmas. The last year we played, the ground was completely frozen to the point we could not put a tee in the ground and we ended up using bottle caps to tee off of. We were all bundled up in ski jackets, hats and gloves in order to play. It was another one of those ridiculous moments that make just being there all the more fun.

When we had called to make sure they were open a couple days before Christmas, the lady said "Honey, we're open every day." Though they might be open every day, it turned out that we had the golf course and the clubhouse afterwards all to ourselves. At one point, the woman working there had to go run an errand, and told us to help ourselves to the cooler and just keep track of what we drank. None of us had met her before, but somehow we were trusted members of this little nine hole course. Maybe it was the Christmas season.

This year, five of us went back to that little course in North Bend for another round of golf. Two of our fivesome are local teachers, and it turns out that my oldest niece is one of their students. Not sure if that is a good or bad thing for her.

The course is halfway up the mountain pass, and is surrounded by deep forest and some smaller peaks. We saw an elk or a moose the year of the deep freeze. This year it was chilly but not frozen. It rained a bit but we were mostly battling the strong winds. It had been a couple of years since we had played there, and the simple clubhouse where we grabbed our own beers is now a nice restaurant. But the course was much the same and we fell into our friendship like the intervening years had not happened.

When the question of why we are playing in December is rhetorically asked, there are several answers. Because we can, because it is Christmas, because sometimes stupid things create the best memories, and even though things change through the years, things like tradition and friendship are worth preserving. 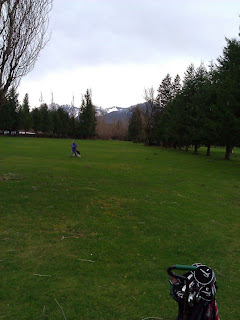 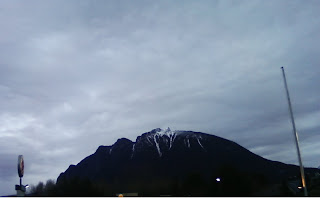 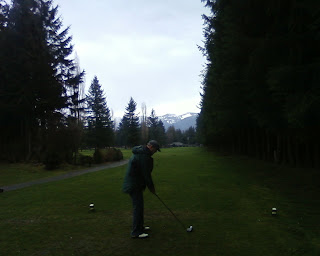 Excellent post! I am drinking your last Redhook ESB that you left in the fridge in celebration!