A friend of mine recently posted this on Facebook:

Name a good thing that happened during 2020.

For me I made a bunch of new friends that I would have never known were it not for this year.

I drew a blank when trying to answer this seemingly easy question. After reading through the many responses, small and good things that had happened to people I didn't know, my comment to the post was simply, "this thread" because I appreciated so much the question and the answers.

Our memories seemed pre-disposed to remember our struggles more than our victories, the bad over the good. On top of that, my memory is chronically poor so 2020 (maybe more so than other years) is all just a haze. But on this last day of the year I sat down and tried to remember some of the more positive things that happened this year among all the general suffering. Since my memory is terrible, this is by no means a complete list, and I look forward to people reminding me of things I forgot.

This was such a terrible year in so many respects. Global and personal suffering. Hardships for friends and myself. People we have lost, and beliefs that have been fractured. 2020 is a year that we will all be glad to have in our rearview mirror. However, a flip of the calendar page will not wash it all away, and 2021 will also be difficult for many of the same reasons. The light at the end of the tunnel can seem far off, but I will continue the effort to look for the small joys that bring us light. 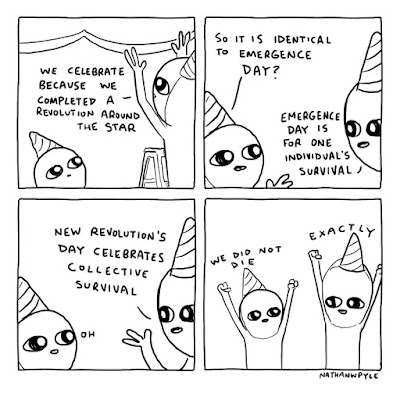 Email ThisBlogThis!Share to TwitterShare to FacebookShare to Pinterest
Labels: a better me, friends, holidays, personal