At home, at work, online when standing in line. Always checking to see the latest update whenever there is a slight pause in life. Memory and attention continues to fracture, and we keep clicking it away willingly, myself included.

I first logged into Facebook sometime in 2008 so I guess we are celebrating our aluminum anniversary this year. Can of beer it is. What began as something recommended to help my real estate/mortgage lending connections has now grown to occupy more time than I thought I had at my disposal.

When I moved to San Diego, I came to really appreciate the online connection with my Washington friends. I would get to see the things great and small that would have certainly been forgotten when we saw each other on my semi-annual visits. More often these days though, the feed is jammed with endless links and stories, and it takes a great deal of sifting through the dirt to find the occasional nugget of gold.

It is time to scale back on all that gets shoved into the feed, but every so often something will pop up that makes me hesitate to clear out all the non-friend things. Because I had "liked" the Big Sur Marathon, and because I check my feed so often, I found out about the last minute chance to get an entry to one of the few races on my bucket list. Still, I doubt these rare finds make up for all extra time scrolling.

When I was down in Utah for the St George Marathon two years ago, the other Sean mentioned he had quit Facebook and was now on Instagram. If I wanted to keep up him and his family (in the somewhat lazy online way), I need to sign up. I hesitated to add another site to scroll through, but he convinced me it was a better place to hang out online.

Instagram is all about the pictures. There are still some sponsored things that show up in your feed to pay the advertising bills, but there isn't an endless set of links that are shared back and forth. It is just pictures, and maybe a quote or thought to go along with it. It isn't totally disconnected with the issues of the day, but the things that appear in my feed are about saving the National Parks, cleaning up the trails, and what effect Instagram (and the endless pursuit of the perfect photo) is having on our wilder areas. These issues are more prevalent in my feed since I follow a lot of hikers. Your experience may vary.

One difference between Instagram and Facebook is that more strangers seem to come in contact with each other on Instagram. While a number of people I follow (or who follow me) are people I know, many more are people I found only online and have never met. Of course there are people I follow on Facebook that I will never meet, but they are most likely to be people in bands I like, speakers and authors I enjoy, etc. The strangers on Instagram are mostly just random people who had a picture that caught my eye, which led me to check out their other work and adventures.

Then I ran into one of the people I follow IRL (in real life).

Izzy and I were on a hike to Rattlesnake Ledge last weekend. It is a popular and busy hike, but it is my default these days since it is reasonably close, has some climbing but is not punishing, and there is a nice view at the end. We were not up early enough to beat the crowds, but at least early enough to get a parking space. I loaded up the backpack (forgetting water for either of us) and headed over to take a few pictures at the lake before starting. 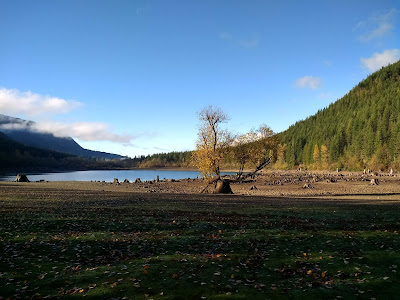 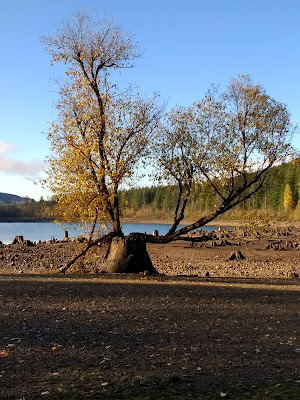 The hike starts at the end of a gated access road that is about a quarter of a mile long. Just as we reached the end of the road and were turning onto the trail head, I ran into one of the hikers I follow on Instagram. She was with a group of four people and they were already finished with their hike (earlier risers). She had stopped to meet a little dog and I stopped as well, it taking a second or two to place how I knew her.  It felt like she understood the slightly confused/recognition look on my face, and we exchanged a smile and a small wave.

It was cool and sort of weird to run into someone you have only seen in pictures. She is not traditionally famous, but with the number of people who follow her she may get recognized semi-regularly. I am not positive I would have recognized her if we passed on the streets, but crossing paths on a trail provided eventual context. If we weren't headed in opposite directions it would have been nice to chat and tell her how much I like her photos, and appreciate that she does not tell anyone where they are taken. Several hikers do this in hopes of not having the places overrun.

The last three days have been filled with meeting up with friends in real life, and with the Thanksgiving week ahead there are more plans to gather, catch up and be present. I plan to dial back the online time, and keep the phone in the pocket more often (unless there is a photo to capture), but scrolling through the online life still brings a surprise now and then. 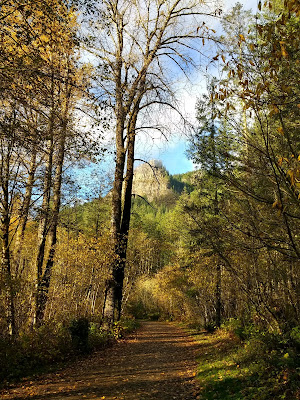 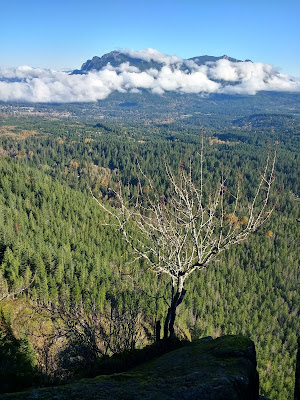 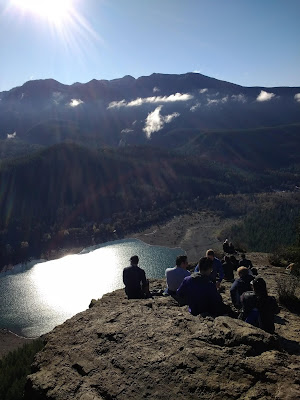