I'm a Maniac, but I'm not crazy

To some, running is crazy. I get it. Actually, I get it that they don't get it. It is hard to explain. When I head out to run in the rain, people wonder about my intelligence. When I mention I run marathons, most shake their heads, wondering if I was dropped on my head at some point. Even though I can't adequately explain it, paying to run 26.2 miles makes perfect sense to me..

Last winter, I ran two marathons in two days. It was born of a friend's challenge, a lark really, and it the most satisfying finish line I have ever crossed. I have been more spent, and I have pushed through much greater pain, but the wash of emotions that crashed over me that day as I finished in just over four hours was amazing. I alternated between laughing and crying, unable to catch my breath between the two.

And it made me a certifiable Maniac. A Marathon Maniac, that is. You may be suffering if:


I have seen the Maniac singlets in many races, and had looked into what it meant, but had never really considered it my thing. But here I am. There are many ways to qualify, and different levels of achievement within the ranks. At the lowest Bronze level, you need to have run 2 marathons within 16 days, or 3 marathons within 90 days. Our little feat of two marathons in two days jumped us past Gold and Silver and into the Iridium level. It is silly, not why I did it, but kinda fun just the same.

But even as I was stretching the boundaries of sanity, I was surrounded by people crazier than I. While Brett and I were running, we chatted with several people who were running the Quadzilla, four marathons on the four days of Thanksgiving Day weekend. There was the cheerful gal who encouraged us on our first round when she already had two marathons in the bank, and this guy I met while huddled around the makeshift fire at the finish line 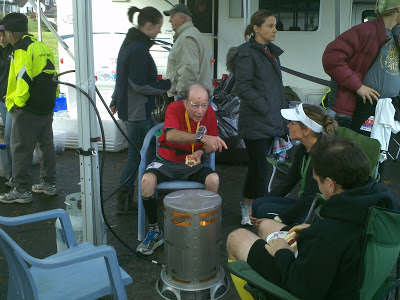 This was not only his third marathon in three days (and he obviously had several years on me), but he had also taken a serious tumble the day before. Even with road rash and a butterfly bandage keeping a facial cut closed, he showed up to do it all again. Crazy is relative.

My running has take a bit of a back seat since that crazy Thanksgiving weekend. A new friend has me back on my bike again after a long layoff. I was looking forward to getting back out on the road, and boy have we ever. He has challenged me to jump back in with both feet (clipped in) because we have a couple of big events to train for.

We kicked it off with the Chilly Hilly ride in February. It is a hilly, 33 mile ride to shake you out of your winter hibernation, and make you regret that second piece of pecan pie. We went on some more weekend rides but then tax season intervened. Since May, however, the miles have ramped up quickly. Memorial Day weekend we did the 7 Hills of Kirkland (actually 11 hills on the 62 mile route). For the five weekends in June, we have hilly rides of a hundred miles or more on the training calendar.

Why all the miles? Four of us are going to attempt the Seattle to Portland ride, 205 miles in one day. A week and a half later, three of the group are going to attempt the Ride Around Mount Rainier in One Day (RAMROD). It is a 155 mile ride with 10,000 feet of climbing. Even though the permit allows 800 riders, there are enough people trying to get in that they have to hold a lottery. So many crazy people lining up. We signed up, hoping to improve our chances for future years, but all three of us "won" the lottery on the first try.

Maybe I am moving a little farther along the crazy spectrum.