Time is a funny thing. It is absolute, unavoidable, yet pliable to our perception.

That last week was very difficult. Probably not the worst of my life, but definitely up there. I don't recall the exact moment when it became clear that the end was near, but once the decision took root in my head, the clock started.

As I mentioned earlier, I spent the last five nights sleeping on the couch. Sierra was only three feet away. The decision had basically been made that first night, but I had not uttered it aloud. There was still time to back out, to get a reprieve, to pray for a Governor's pardon.

While the days seemed to hurry by, time slowed in the evenings as we stared at each other in the quiet of the night. I had so many moments, pictures, stories running through my head. Each night I would write a little, and spend time going through the various hard drives looking for photos. Each picture would call up a memory and make me wish I could say, "Remember that time..." As the turmoil of emotions ran roughshod through the week, I would get each night this hour of silence. Time where I could just be. Time where I could stare into those trusting eyes, and be completely present.

The last night, time stretched out even further. Sierra was up at 3:00am, probably looking for a really early breakfast, but we went outside for a pee and poop instead. As I stood outside in the middle of the night, I realized there was just 12 hours left. I tried not to read too much into it, but it did keep me from falling back to sleep for a while. It seemed that I had just closed my eyes and she was pacing at 4:30. Then again at 5:30. Each time, I would usher her back to her bed, scrub her ears, and alternately worry about missing sleep and be thankful for the hourly wake up call. At 6:30am, it was finally time to get up and have breakfast.

I tried to make those last hours go slowly as possible. Outside of quick three mile run, and a trip to the store, I spent the whole weekend at the house. We went outside more times than normal, not wanting to turn her down even though we had been out an hour ago. With nowhere to be, I just let her wander around, sniffing the air and the grass. Nice and easy, nice and slow.

After the vet left, and I was alone once again, I packed up most of her things before I had time to think about it. I sent up the post to let everyone know what had happened, and then I went outside again. Not sure where I was headed, I turned right instead of left. I exchanged messages with Kristy along the way, but mostly I was there with my thoughts and memories.

I ended up walking the same three mile route I had run earlier in the morning, only in the opposite direction. Moving more slowly, and seeing things from the other side, my eyes were carried to the trees and trails running through them. To the paper-thin bark was peeling away from the trunk of the tree, even as someone had wrapped it to keep it secure. How the bits of spring growth lurked in the background of winter bare trees. My perception moved out of my mind and into the world. More slowness and time to really see.

My heart felt a bit lighter when I returned from my walk. The anguish leading up to that day no longer weighed on my soul. There was a void, and emptiness, but I too felt a certain amount of amount of release, a place of peace.

I am thankful for all the time I had with Sierra, and strangely blessed by moments in her last week. She is in my heart always, along with the lesson to take it slow, to take the time to just check out your surroundings, to be present and wait for the peace to come. 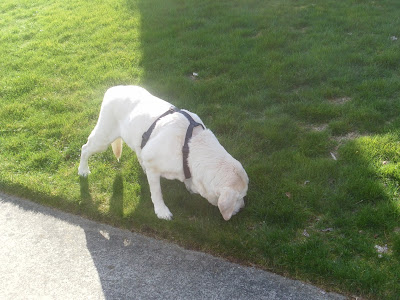