Another weekend of good stuff

My weekend long run is up to 15 miles, and I decided to get it in on Saturday before Halloween kicked into gear. More good weather, just some wind messing things up toward the end. I did fine until about mile ten, and then ran low on energy. Legs felt heavy, heart rate started to climb, brain started to rebel. I had skipped lunch, so I was pretty hungry by the time I was done, but I made it through.

I was invited to a friend's house to walk the neighborhood with her kids. Halloween means very little to me most years. I don't get in to the dress up thing, and we didn't get more than handful of trick-or-treaters at the house on any year. Walking around with some five year olds was right way to spend the holiday. 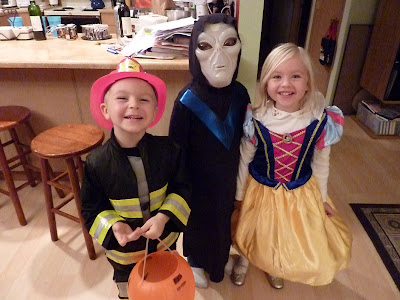 They were seriously amped before they even dug into the candy for the sugar rush. The neighborhood was a good one for trick-or-treaters with plenty of the houses handing out candy. One house had even set up a haunted house in his garage, scary enough that some of the kids didn't dare go in. As we went along we ran in to some of the kid's friends, so the group grew as we made our way down the street.

The kids are old enough to walk up to the doors by themselves, so the adults hung out in the street. As the kids ran back, they screamed out "we got ___" (fill in the blank with type of candy). Skittles and popcorn balls seemed to be the most exciting. Fortunately the kids ran out of steam before the adults, and were content to head back to dig in to their loot after about an hour.

The adults stayed up late playing cards while the kids tried to come down off their sugar high long enough to fall asleep. The group got together again for lunch on Sunday with a couple more friends. We walked down to a local brewery and became card carrying citizens of the Rogue nation. Citizenship has its privileges - discounts, birthday beers, etc. I also picked up my King County Library card on Sunday so the wallet is getting filled with good stuff.

Hey, I thought you weren't supposed to accept popcorn balls anymore? Or any homemade/unwrapped stuff for that matter...

They are actually packaged from ACT II.