The fastest thing on two wheels

I have had my road bike for about thirteen years now. I started biking a couple years earlier, first using a rust bucket I had from college, and then slightly upgrading to a hybrid bike I picked up for about $150 at a bike shop no longer in existence. I rode that hybrid for a few years, and it actually carried me through two-day, 200 mile STP bike rides for the first three years that I rode that event.

But the road bike changed things.

As I have mentioned previously, I hesitate to replace things that still work. Of course the biggest part of riding is fitness, but the hybrid wasn't really built for more "serious" biking. I couldn't quite justify the upgrade, especially since there was lots I could do toward fitness and weight loss, but I did want it pretty badly. Then I had the opportunity to build a deck for my brother, and that earned me enough money to buy a good entry level road bike.

My Specialized Roubaix has a basic aluminum frame, and though it was definitely faster than the hybrid, it was still built for the comfort of long haul rides rather than for pure speed. It is nothing special to look at, but it feels like a sleeper vehicle that has some hidden power you can't see. It has taken me on a couple one-day STP rides, around Mount Rainier twice, over the Continental Divide, and on a 1,000 mile trek from Seattle to San Francisco.

Of course I see all manner of beautiful bikes when I am out riding. Feather-light carbon frames with gorgeous construction and higher grade components. But I have never really considered getting another road bike. For one, I didn't feel that my stock Roubaix was holding be back, and for another I sort of embraced the beat up old classic taking on the shinier new vehicles.

Then I got into triathlons.

When I first started thinking about triathlons a decade ago, I had read that a tri bike can make a real difference even over the nicest road bike. The differences are two-fold. First it is about aerodynamics for the bike segment of the event. The frames of tri bikes are more blade-like and cut through the wind more easily than the more typical road bike frame. More importantly though is the body position. The largest aerodynamic drag is not the bike, but your body. On a tri bike (also called a time trial bike) you ride in a lower, more stretched out position. On most other bikes you are sitting upright and your chest/body creates a lot of wind resistance. On the tri bike, your arms are stretched out and your torso more horizontal. Less frontal area, less resistance.

The other difference is also related to that stretched out position. Since the triathlon is a multi-discipline event, you need to constantly think about saving energy from one section to the next. From what I have read the position works slightly different muscles than you use when you are running. The theory goes (and my later experience would confirm) you finish the bike leg of the event with fresher legs for the run.

This new sport gave me a little better excuse to get a new bike. However, even though I had three triathlons planned for 2019 I had no plans to get a tri bike until at least next year. I planned to see how much I enjoyed triathlons, then hopefully I could pick up a used bike somewhere when I started to get more serious about the clock rather than just finishing.

And then of course I won a bike.

As I mentioned earlier, the bike that I won would've been an upgrade to my current road bike, but since I didn't really need/want another road bike, the bike shop owner was willing to use it as store credit toward a tri bike. I went down to the bike shop a week after the raffle to see what we could make happen. They of course had some very nice bikes, but as before with moving from hybrid to road bike, the largest jump in performance was just moving from one type of bike to another. I was looking at a (still very nice) entry level tri bike.

They had two brands to choose from at the entry level and I took each one on a test spin. While they were getting them set up for me I commented to one of the guys working there that I had a triathlon in a few weeks, but had no plans to ride the new bike. He looked confused so I explained that I figured it would take some time to get used to the new bike and riding position, and I just didn't feel confident I could would be comfortable enough in that short of time. He assured me I would be.

And he was right.

The test rides did feel a bit weird, but I felt much more comfortable than expected. One bike felt much better than the other, so it made the choice easy. Since I was setting up a new bike there were several additional purchases to be made at the store, so they got a little of my winnings back. I had to wait another week to get the exact bike I wanted, but it was so worth the wait. I think she's gorgeous. 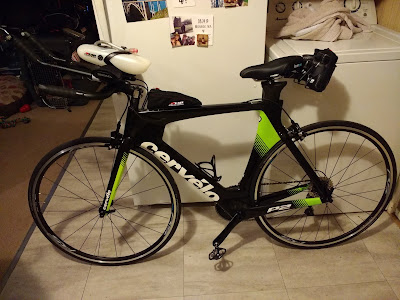 I was able to get out on my new bike for two Saturday rides of about 20 miles each before the triathlon. Certainly not the best plan to change things so close to the race, but with each pedal stroke felt a bit more comfortable, and I definitely felt faster.

When I talked to my brother about buying the new bike, he was blown away at how much bicycles cost. My original road bike cost $1,200, but I have had thirteen years and thousands of miles to enjoy it. And it is not retired. It will continue to be my regular bike for group rides, and it will carry me around Mount Rainier for a third time in July.

The tri bike was $2,900 before all the additional equipment, so I was very fortunate to have basically won a $1,500 down payment at the raffle. I would not have otherwise made this purchase happen, and hopefully it will see fifteen years and thousands of miles as well. This bike has already made a huge difference after only one race (next post) and it is probably the nicest thing I own.

It certainly isn't a sleeper.