Sierra had another episode earlier this week. She could not stand up, would not eat or drink, and was panting and whining out of fear. She had a similar episode back in October, and the emergency vet diagnosed her with Idiopathic Vestibular Disease. From my last post,


The vestibular system is what gives people, and dogs, their balance, coordination and equilibrium. When dogs develop IVD, their equilibrium becomes disrupted suddenly, dramatically and without warning. The profound symptoms of this disorder can incapacitate the dogs and are frightening for owners, as well.

And of course the Idiopathic portion of the name means they don't know the cause of it. Just like last time, I was at work when the symptoms came on suddenly, and Matt and Holly were left to try to comfort her. Only this time my job site was four hours away from home. From their description, it didn't sound like it was as bad as last time, but I still felt terrible being so far away. From our last visit to the emergency vet, I learned there is little more you can do to treat the symptoms other than comfort her and keep her safe, which is helpless in its own right, but being so far away left me feeling doubly helpless.

I made it home by 10:30pm to find her panting and whining in my room. I sat down, pet her and said her name over and over trying to calm her down. It didn't help much. Holly let me know that she had been able to hand feed her and then give her normal insulin shot just before I arrived, but she still wasn't drinking. Since the disease causes her world to spin and make it hard to track the horizon, I sat in her bed with my arm around her to give her something to brace against. After about 45 minutes, she calmed down enough to drink some water and fall asleep.

Although it was clear she was panicky and disoriented, she again didn't appear to be in any pain. Since there is little that the vet can do other than give her fluids and nausea medication, I decided to just keep her home and see how she was the next morning. Now that I could see her in person, it was also clear that this episode was not as bad as the last. She was so far gone last time with her tongue lolling out the side of her mouth that I was convinced she had suffered a stroke. There was head tilt again, but it was more like she was perking up to listen to you. Her eyes were also not flicking back and forth nearly as much. We were both happy to sleep through the night without incident.

I had the next day off from work, so I was able to take care of her and monitor her progress. I used her harness to help her up, guide her, and carry her when necessary. Now three or four days later, she has slowly improved. She is still unstable when she walks, particularly on the hardwood floors, but she doesn't need to be led everywhere. She is eating and drinking relatively normally, and starting to lose the head tilt. We seem to be headed back out of the woods.

This morning she woke me up early to eat, so unfortunately that part of normal is back. When I filled her dish, she tentatively walked over to gobble it up. After going outside to take her morning constitutional, she crossed the slippery hardwoods without incident to the safety of the carpet. Then she let out a good sneeze and knocked herself to the floor. It was sad and a little funny at the same time. Anxiety changing to smiles is another good sign of progress. 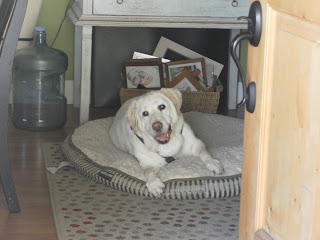 What a love! I'm so glad she's doing better.

Glad she is doing better. She looks like she is smiling in this picture.