That is the slogan of the Northwest Passage RAGNAR Relay we participated in this weekend. The brief description is - 12 runners, 189 miles, 30 hours 46 minutes, from Blaine to Langley Washinton. The longer description follows.

A few of us in our little running group picked up the brochure for the relay last year thinking it would be a fun challenge to put on the calendar. It sat in the back of our mind for a few months before we all committed to running it in 2008. We had 5 or 6 ready to sign up last fall and the plans started being put down on paper. Tami and Alyssa volunteered to be co-captains for the team. It was a good combination of organization and enthusiasm. Late 2007 and early 2008 would add a little extra meaning to the relay for us all.

As I have mentioned before, Alyssa found out she had breast cancer in December, and Tami found out she had a carcinoid tumor in January. Both co-captains find out they have cancer and beat it in the three months between committing to the relay and actually signing up. We discussed team names and decided to honor their successful fight by naming our team "I Will Survive". Gloria Gaynor would be played often. Below is our team shirt: 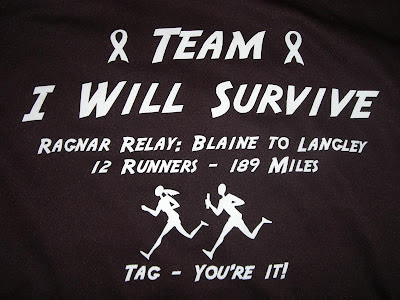 We needed 12 runners and 5 volunteers to make the relay happen. We started talking to friends and co-workers about the event, and found several people crazy enough to join us. Alyssa found our final two runners on the relay website. The husband and wife team of Erich and Amy were a great addition. We didn't get the chance to meet them until the day before the relay, but they fit right in from the start. The wife volunteered to drive our van, and Alyssa's boyfriend David volunteered to drive van #1.

An event of this undertaking took a little planning. We met a few times to go over logistics, van rentals, food, lodging and divvying up the different legs of the relay. The way the relay is set up is there are 12 runners running 3 legs each for a total of 36 legs. There are two vans with six runners each that work in shifts. Runner #1 runs his leg, hands the baton to runner #2, then hops in the van until his turn comes up again at leg #13. When runner #6 hands off to runner #7, van 2 takes over with its six runners. The runners in the inactive van have some time to find meals and hopefully sleep while the other runners are running their legs.

We had runners of varying ability so it took a little time to match our runners to the different legs of the relay. The total distance of the legs varied from 11.4 to 18.8 miles, and some were hillier than others. No one had an easy time of it, but we tried to match the stronger runners with the more difficult legs. A few of us also met a week before the relay to do two runs in one day, but beyond the two runners that had done this relay before, we really weren't sure what we were getting into.

We headed up to Blaine Thursday night to get the last bit of real sleep before the Friday morning start. We were up early to decorate the vans before heading to the start line. 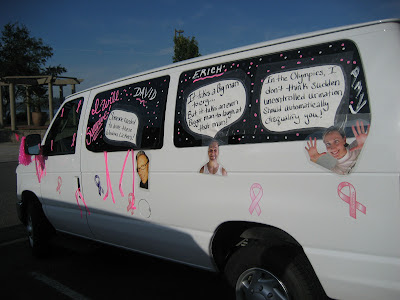 There was a contest for the best van decoration, and we had hopes of winning. The starting times are staggered with the slower teams starting first. As we were one of those slower teams, we started at 9:00am.

We all headed to the start line to see Erich start the first leg of the relay. Van #2 (which I was in) didn't need to be at exchange #6 until about 3:00 in the afternoon. We went back to the hotel to check out and decorate our own van, then we did a little last minute shopping and had some breakfast. We headed to the exchange point at a park in Bellingham a little early to cheer other teams coming in. Todd was the first runner in our van and he took the baton from just a bit after 3:00. We would be on duty for the next 5 hours and 29 miles.

The average relay leg works out to be about 5.25 miles, but they varied from 2.9 miles to 8.5 miles in length. Todd and Wendy had shorter distances to start, but almost all of the climbing for this round. Todd led us through Fairhaven and out of Bellingham, Wendy went by Lake Padden, Dan ran past Lake Samish, my route took us back out toward the coast, Tami's took us closer to the Pacific before heading south, and Cherie's leg headed south ending at waters edge of Padilla Bay about an hour before sunset.

We were able to meet the runners in van #1 at the exchange point. One drawback of the relay is that you only get to see the runners in the other van (briefly) at the major exchange points. With 150 teams participating, the inactive vans are not allowed on the route because of the additional traffic it would cause. While there we found out that Amy, who was sick at the start, had taken a turn for the worse and needed to head home. She had completed her 8.3 mile first leg, but was in no shape to continue. Her other relay legs would need to be picked up by the other runners. Fortunately they were shorter, but it still meant bonus miles for Erich and Gary.

After seeing van #1 off, we headed straight to the next major exchange point to take a shower, have some dinner, and try to get some sleep. Sleep was going to be difficult because we only had three hours to do all the above. Some were able to grab some quick zzz's in the van. I stretched out on the grass, but was unable to get to sleep. Our volunteers Michelle and Cheryl were also working at this exchange point so we were able to see them and thank them in person.

We were back on duty at about 11:45pm Friday night. The relay goes on non-stop, so we would all have a chance to run in the dark. We had reflective vests on and a headlamp to partially light the way. We had a couple friends volunteer to ride their bikes to give us additional light and keep us company. David rode with the runners in van #1 and Brian kept us company in van #2.

It was a really cool experience to run in the middle of the night. My shift started at 3:15am and I was running a route into Anacortes. Looking at the route now it looks like I would have had some nice water views, but of course it was a bit dark for that. I also was concentrating on running a fast leg. I ran the fastest 4 miles I have ever run, averaging 7:49 minute miles. Even so, there was a runner who passed me easily. During this night shift, several of us were passed by runners on elite teams that started long after we did.

While your van is on duty, you drive the same route the runners are on. You end up leapfrogging them a couple of times, stopping to cheer them on and hand them some water or other aid if needed. We also tried to cheer on every runner that passed us by. Even when your not running it seems you are always on the move, checking the map, getting ready for or recovering from your run. On this night shift we needed to keep the cheering to a minimum so we wouldn't disturb the local residents trying to sleep, but we made an extra effort to watch for and encourage other runners without bike support.

Todd, Wendy and Tami all had longer legs this time around, and Todd and Tami's were very hilly to boot. Cherie finished off our second round by running across the Deception Pass Bridge. Wendy and I joined her in crossing the bridge, and it was a beautiful sight with a mix of moon and pre-dawn light.

We passed the baton to van #1 at 5:30 Saturday morning. After driving back toward Anacortes to drop Brian off, we again decided to head straight to the next major exchange. After stopping for gas (and a wrong turn diversion) we arrived at a school in Coupeville. After a shower I decided to skip breakfast in hopes of getting my first sleep since Thursday night. I found a mat in the gym and tried for a quick nap. Unfortunately the fire alarm went off two times, so I don't think I got any deep sleep. I think I was able to string together an hour to an hour and a half of shuteye.

We were back on duty at around 9:30 or so. I had created a sheet to predict when each runner would be taking off, but it really was just an estimate based on each runners past 10k and half marathon times. We were running a bit behind, but not too badly.

This set of legs took us south along Whidbey Island to the finish line in Langley. The temperature was rising, and there was still plenty of climbing to do. In exchange we were rewarded with some great water views. With the hotter temps and the fact that we were all running a bit low on energy, the van stopped a little more frequently to support the runner. We had squirt guns and iced towels to try to cool down each runner.

After seeing Cherie at mile one of her last relay leg, our van headed to the finish line to meet up with the runners in van #1. It is traditional that all the runners join up near the finish line so that they can all cross together with the final runner. Erich and I headed back on the route to run with Cherie as she trudged up her final climb. The finish line was a welcome site after nearly 31 hours on the road. We shared a few stories, talked to a couple other teams, and enjoyed a well-deserved slice of pizza and glass of beer.

It was a great experience and I would absolutely do it again. The event and route was very well organized, especially considering the distance covered and number of teams and runners involved. Every team we met on the road was very supportive and seemed to be enjoying themselves as well. If you are interested in seeing pictures, you can find ours here, Wendy's here, and Tami's here. Wendy and I will be putting a video together sometime in the next month, and I hope to be able to post them here as well.

Nice recap Sean! Thanks! What a blast!